Ignoring the sound of the continuous stream of traffic from the highway, and already used to the smell of engine fumes, we settled ourselves for the night. "Goodnight darling," "G'night love", and we snuggled our ears into our pillows.


Not even five minutes later we sat up straight again. It appeared we had Neighbours above us, and they wanted to make sure we should not ignore that fact. After all, they were on Vacation, without a care in the world and happy as can be. They parked their car right in front of our room, happily chatting at full volume about their day. Twink! The car was locked. Clomp, clomp, clomp!!! Their feet went up on the metal stairs, Donk! With a bang their door closed, then the shower ran, and toilets were flushed. Our own plumbing ticked, clacked and shrieked in sympathy, but finally upstairs was quiet again. Since it was not yet eleven o'clock by then, we really had no reason to complain, nor be upset. We smiled, relieved that it was all over with, and went to sleep again.

However, it turned out the neighbours had not finished their evening yet. In fact, it was just starting. DONK! the front door banged shut, CLOMP CLOMP CLOMP down the metal stairs like a herd of ephelopes, TWINK went the car, the engine was started. We waited for the sound of them driving away, but that didn't happen. Instead, they spotted a few friends, opened the car window and started a happy, loud, and loooong conversation. Finally, well after midnight, they were on their way. We went to sleep.

We anticipated that they'd come 'home' again... which they did, around three AM. By then their mood was enhanced even further by beer, wine or stronger spirits, so they made no attempt to quietly sneak upstairs. In fact the clomping, chatting and donking sounded louder than ever. Even their shower and our plumbing seemed to hiss and tick louder, but that must have been our imagination. By four o'clock, it finally was as quiet as a motel along the highway can be. In fact, even the traffic was kind enough to slow down for us. Exhausted, we fell asleep. Mur told me he heard further undefined noises during the night, but I actually choose to disbelieve him. He has too much Imagination and we'll leave it at that...

Seven o'clock sharp, some monstrous machine arrived with a Roar, followed by several Huge Bangs! The whole bed was shaking! We jumped out, bewildered and shocked, what on earth??? Pfew, nothing to worry about, the motel was not being demolished by one of those wrecking balls on a chain from a crane (which, frankly, it DID deserve, but I'll leave the state of the place out of this entire story... at least it was clean and that made some of it all right). Good, it was only the garbage truck, emptying containers. There were only a dozen containers or so, so by the time the truck had finished, we got up to get breakfast.

Ah, breakfast! Had I mentioned how our nice receptionist had been raving about the wonderful 'continental breakfast' they served in the lobby area? I guess I forgot to mention that, but that morning, our hungry tummies certainly remembered. Now, I have another confession to make: I am a spoiled brat. There, you have it. My parents have known this all my life, my husband for more than eight years, but now it's out in the open for all to know. Spoiled as can be. If there is one thing I enjoy about vacationing, it is the sheer luxuries it offers, such as a cozy, dimly lit quiet breakfast lounge with soft chairs and tables with a cotton cover and fresh flowers, and gentle classical music caressing your ears. You are humbly welcomed by a well dressed waiter who hastens to pull your chair backwards. He bows while he gives you a leather book with a large selection of the most exquisite viands, and then makes it his sole purpose in life that your every culinary wish is fulfilled to perfection. So, with visions like that in my mind, we went looking for this 'lobby'.

Instead, we had to enter the tiny reception area, yes, the one with the bars and locks and "Do Not Hold Us Up or Else" signs. The place was even more cramped now, because a scruffy foldaway table was placed in a corner with coffee in plastic cups and plastic spoons to stir it. There were slices of bread on plastic plates. There was butter and jam and honey and peanut butter in tiny plastic containers, with plastic knives to spread such on the bread. No forks, not even of the plastic kind. However there were people, lots and lots of them, making sure they'd stand and chat right where you needed to grab a plate. Luckily we were allowed to take the coffee and bread back to the room with us, which is what we did.

After this enlightening experience, Mur was ready to go to the mall. I wanted to look up the exact location on Google Maps, but Murray had blind faith in the receptionist who had pointed 'that-a-way' yesterday... and said we'd find it without mundane tools such as cellphone maps. So we walked... and walked... and walked... following the highway till our tongues finally reached all the way down to our shoes. The conversation that ensued will be instantly recognized by any married couple:

Sophia: Pfff, we walked quite a bit... and I don't see the mall yet.
Murray: We're nearly there, can't be far now.
Sophia: I don't even know where we are! So how do you know it isn't far?
Murray: I know! It must be nearby, let's continue just a bit shall we?
Sophia: And what if we are walking in the wrong direction?
Murray: We can't be! The receptionist said it's this way!
Sophia: But I don't even know where we are!
Murray: YOU SAID THAT BEFORE!
Sophia: Why don't we ask where it is?

Ah, most couples will start to shudder now, oh oh, the pesky 'ask' word that females just can't stay away from is mentioned! The rest of the conversation I will spare the sensitive reader, suffice it to say that not much later, I got my way and asked a Lady - and we ended up in the mall at last.

We actually had a great time there, it was large enough so we could shop for our lunch, supper and other needs, also we bought clothes for me (yay! the sole purpose why I went to Calgary in the first place!), and two nice rugs for the library downstairs.

We even visited the pet store, where we saw this cute sight: 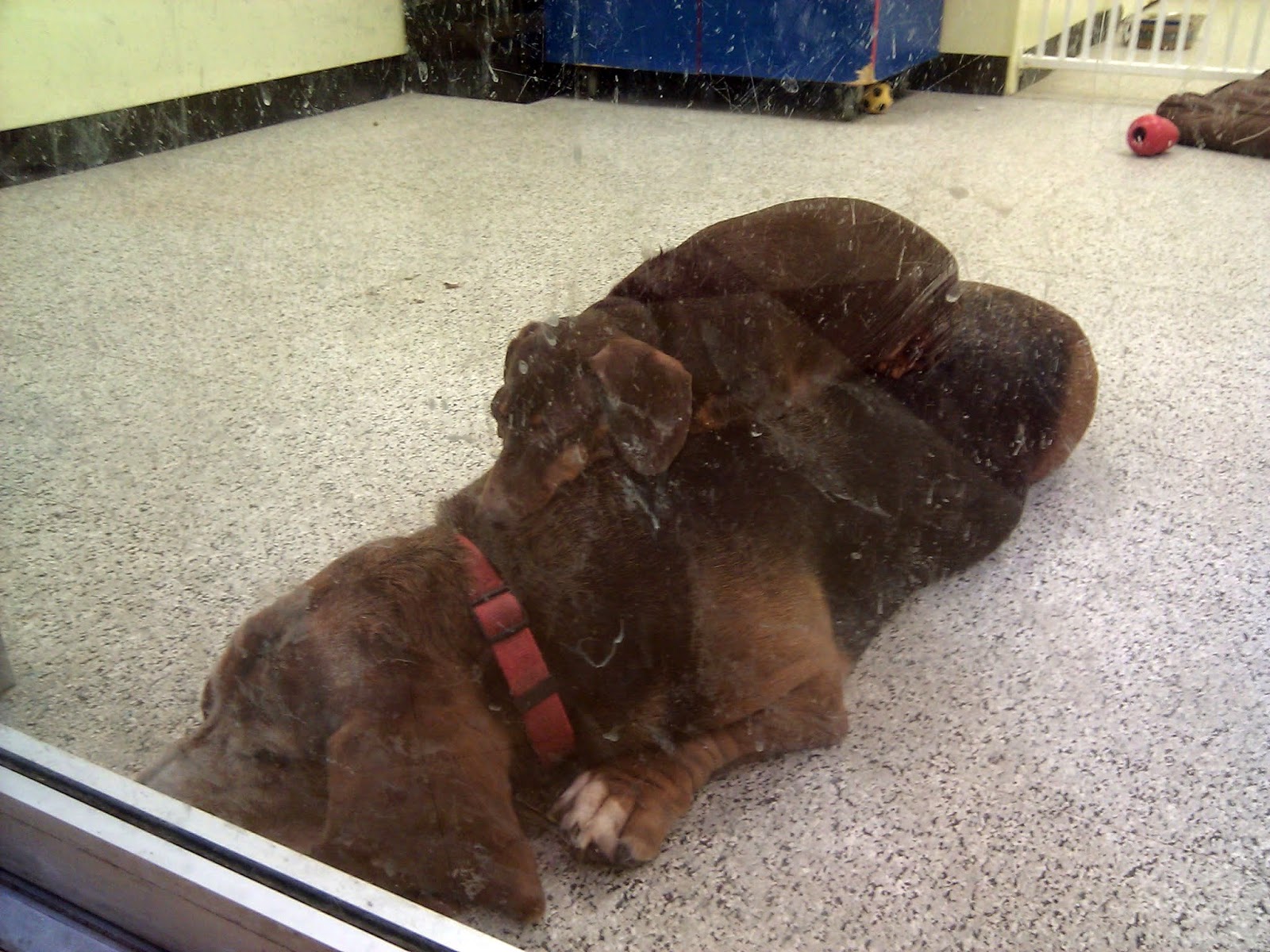 Sweet, that little dog sleeping on top of the bigger one... how I wanted to take both home with me!

Alternating between the mall and at the motel, we managed to get through the day and 'looked forward' to the medical test the following morning. But first, we had the privilege of spending another night in our motel... and so, when we settled down for the night and listened to all the same sounds we heard the night before of presumably the same neighbours, we said to each other "Want to go home a day or two early?" "Did you just read my mind?" And so, with the comforting thought that in eight hours we'd never have to see the place again, we tried to remove all the noises from our consciousness and slept as best as we could.

When we checked out the following morning instead of two days later as we had planned originally, the staff was not at all surprised. Guess it happens a lot in motels like that!

To be continued...
trips and events
Location: Calgary, Canada