The morning of the stress(ful) test had finally arrived. For weeks Murray had been excited about it, worried silly and hardly slept.


However, as these things usually go, the actual test was no problem at all. He was surrounded by pretty nurses who put him in a room that resembled a Star Trek control panel, then wired him up, injected him with some fluid and made him run like a mouse in a wheel. I think he quite enjoyed the attention... at least he came out grinning like a Cheshire cat.

When it was all over, we phoned for a taxi. "Where to?" asked the driver. "The airport," we said.
"Say WHAT?!" The driver was flabbergasted. "I have picked up numerous people from this medical facility," he said, "but never, ever have I had to take anybody straight to the airport!" We smiled and said we had enough of city life, which was quite true too.

We were dropped off and found out we had to wait till the next morning to fly back to Cranbrook, the evening flight was full. We did not mind that, we had anticipated the possibility and already decided that come what may, any place would be better than that horrid motel. So we went to the airport hotel (Delta) and booked a room. Ahh, such luxury, such quiet, such bliss..... I bet that night the only ones that were causing upset and excess noise to the surrounding rooms were two people snoring like piggies... if you were next door to us, we apologize... Boy did we sleep that night to catch up with the two broken nights!

The next morning, we had breakfast without having to push and shove our way to the trough, and I'm sure the waiter who pulled my chair back must have wondered why my mouth was split from ear to ear, my grin was that broad!

At the Calgary airport, Mur bought me a present. Before the animal activists jump up and down: no actual living being was harmed in the making of this toque (except myself when I became everybody's laughing stock wearing it): it is guaranteed genuine Fake Fur! Can't wait to wear it in the winter, it is warm! I don't care what people say, I like it, so there! 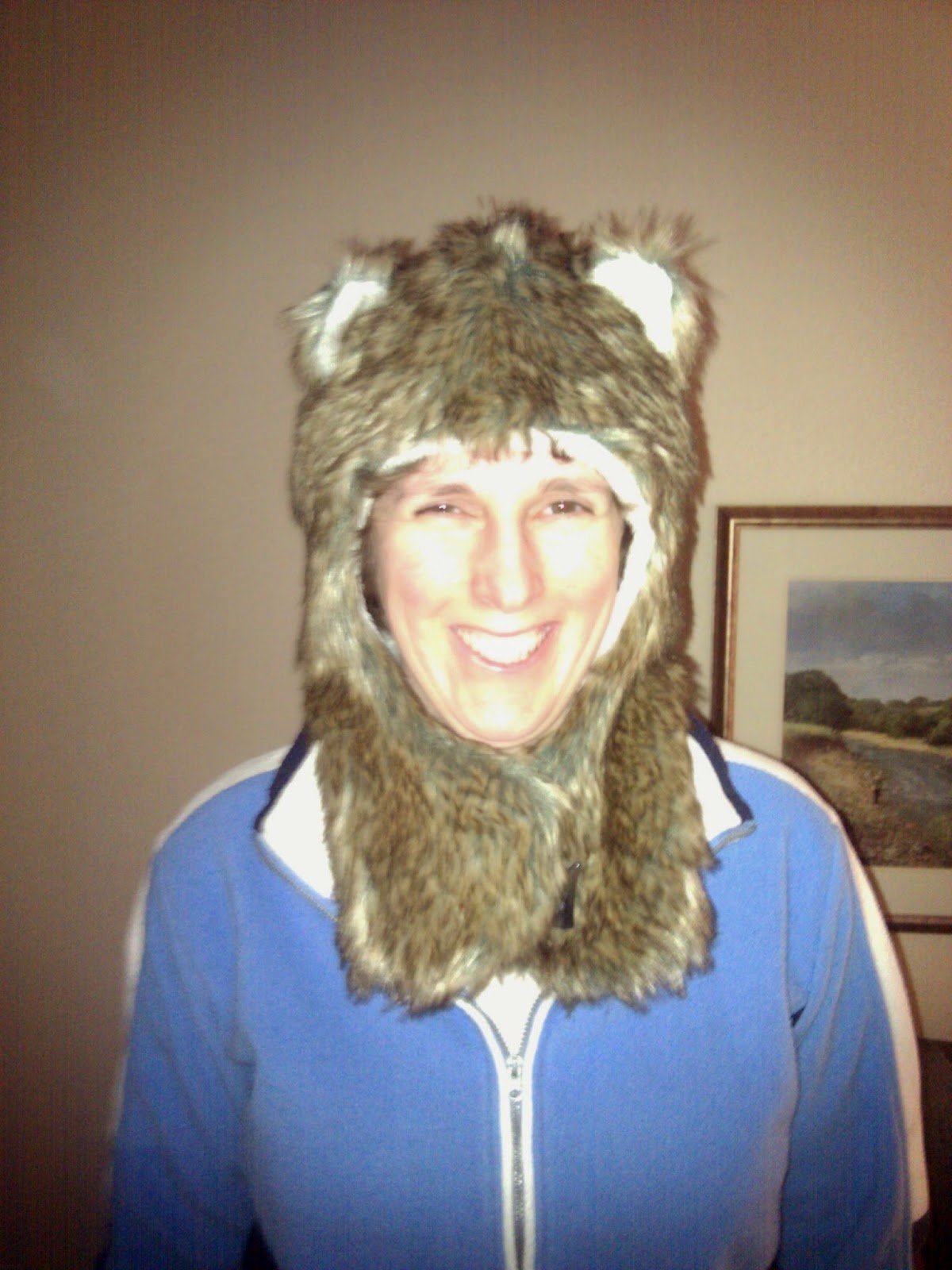 And so we found ourselves back in Cranbrook, nice, quiet Cranbrook. Without many more adventures we got to the garage, where the car was waiting for us with eager anticipation. All the way back home to Creston she was purring like a cat, she was so happy! She responded at the slightest touch of the steering wheel, yes, she was in an entirely different mood altogether. We solemnly promised her that we would never again neglect her needs for so long. When it is time for another health check, we shall not delay it. There, you heard us Car, it's a promise!

Our cats were ever so pleased as well to come home again, and they too told us how much they had missed us. At least their hotel was nicer than ours... and they had been served hand and foot.

And, finally, Murray got very happy news that he is relatively maintenance free as well, at least nothing that a little Care won't solve.

As for myself, I looked out the windows about sixty times per hour to verify the pretty view, peaceful surroundings and stress-free environment were still here. I know for an absolute fact that I shall never be a city person! It's great to go back to our regular life again!
trips and events
Location: Calgary, Canada