It's finally going to happen! Being all excited, we were up at 6am and ready to go. Suitcases packed and tagged, ms Zaandam, here we come! 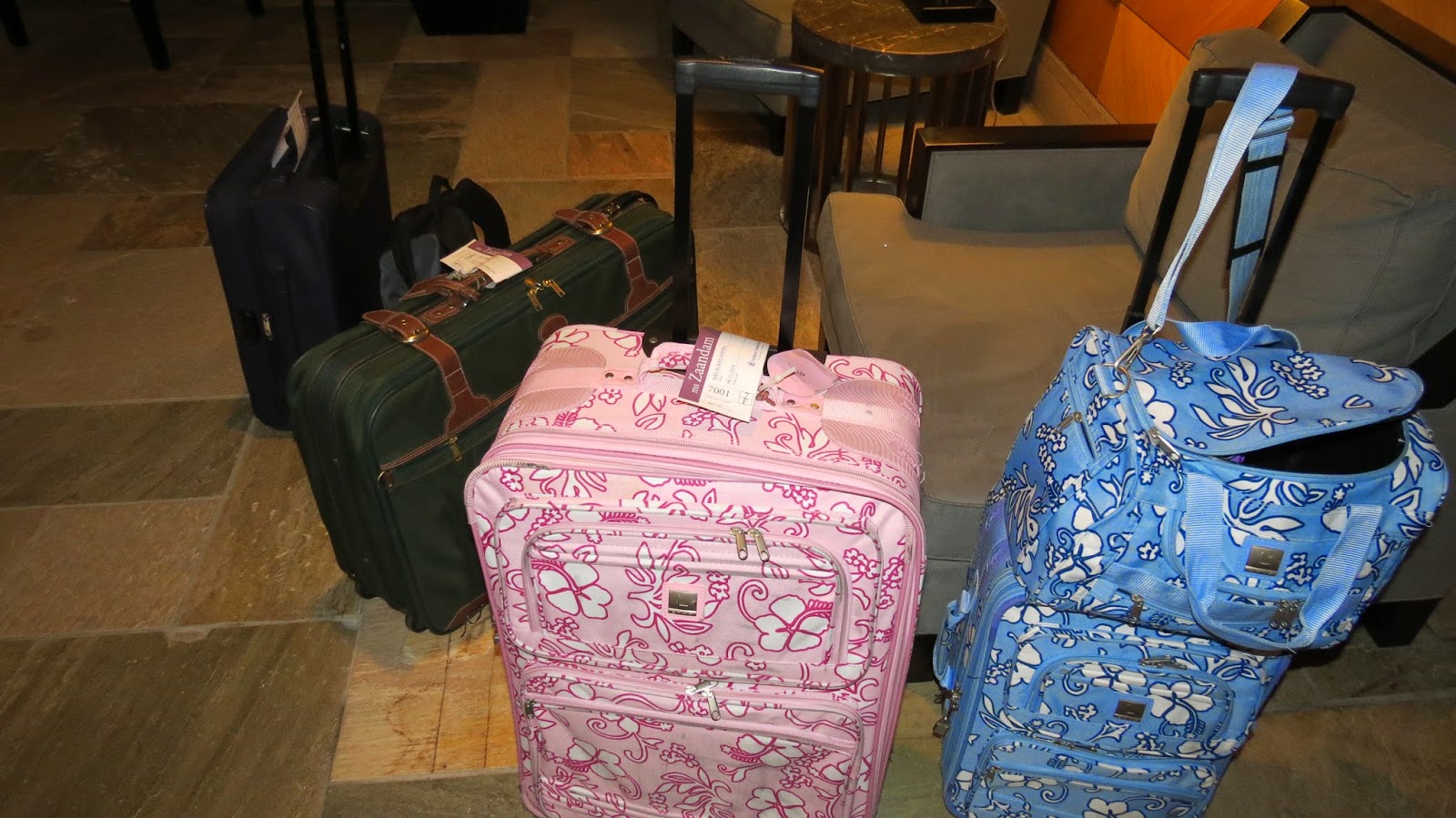 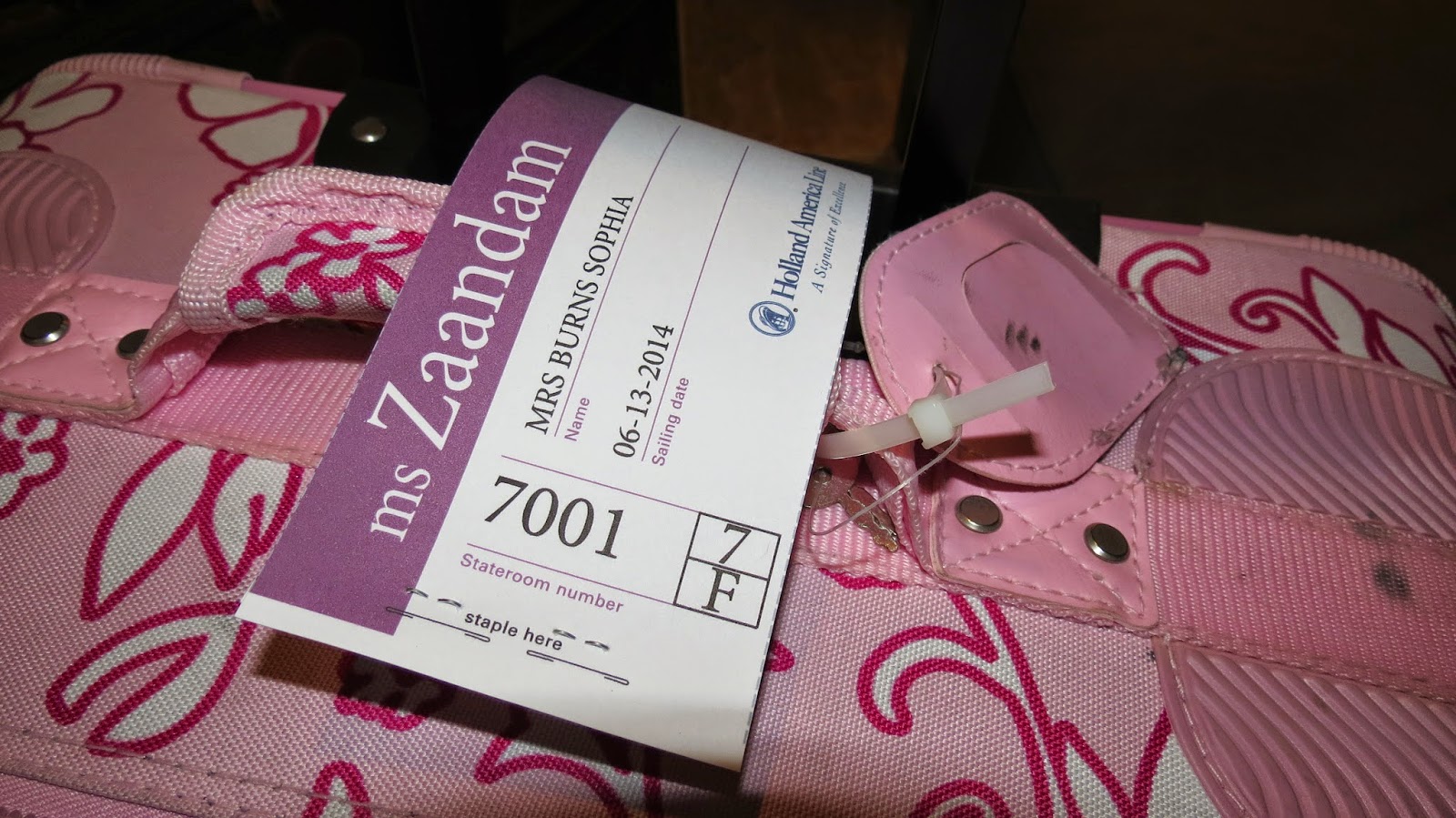 We had coffee and a muffin at the airport, then went to the Arrivals terminal to meet with the HAL representative. We still had a few hours to kill, so we walked around the airport. It wasn't before long that I found a camera left behind by somebody, which we handed over to the Information desk. Not five minutes later, Murray found a bag that had fallen off of somebody's trolley... that got handed in as well and claimed by the relieved owner. Another ten minutes later I sat down to wait for Mur, when I saw the couple next to me get up and walk away - and the lady nearly left her purse behind! At least this time I could alert the owner in person!

Having done our three good deeds for the day, we were finally able to board the shuttle bus to drive us to the dock. The bus driver kindly gave us a guided tour through several Vancouver highlights. It was certainly pleasant enough, but all I could think about was the ship and finally getting on board... I looked forward to our cruise so much!

However, once we reached our destination, my mood bottomed right out. Oh no! Thousands upon thousands of people were lined up, not only to board the ms Zaandam but another ship as well (the Enchantment of the Seas, which is twice the size of the Zaandam).

The line-up was tremendous. We had to queue through endless rows of zigzag tape waiting to go through security, typical of an international flight in airports. We thought we'd be there for the rest of the day at least. However, to our tremendous surprise, the line-ups moved and not even 15 minutes later our bags and ourselves were approved to go into the next line-up, which was for US Immigration. That went fast as well, though one of officers was the most disagreeable person we have ever seen, with a face that matched the rear end of a bear. He seemed to enjoy humming and hawing over every single passport, holding it to the light, comparing all faces with our pictures and actually pretending to think that some did not match, all without uttering a single word to anybody. Miraculously, after consulting another officer, all passports were approved after all. To our dismay he was the very officer we ended up with, him of all the pleasantly smiling and chatting other immigration officers! Of course he made a big fuss over my passport too. I cross borders all the time and never have I had to go through all that. Ugh! Considering every single passport was Canadian in that particular line, I don't think that display of authority was quite necessary... Talk about a bear with a sore behind!

However all that was quickly forgotten, because we were one step closer to enter yet another queue: the last hurdle of finally entering the ship itself. Our picture was taken... the first of many we were to find out. 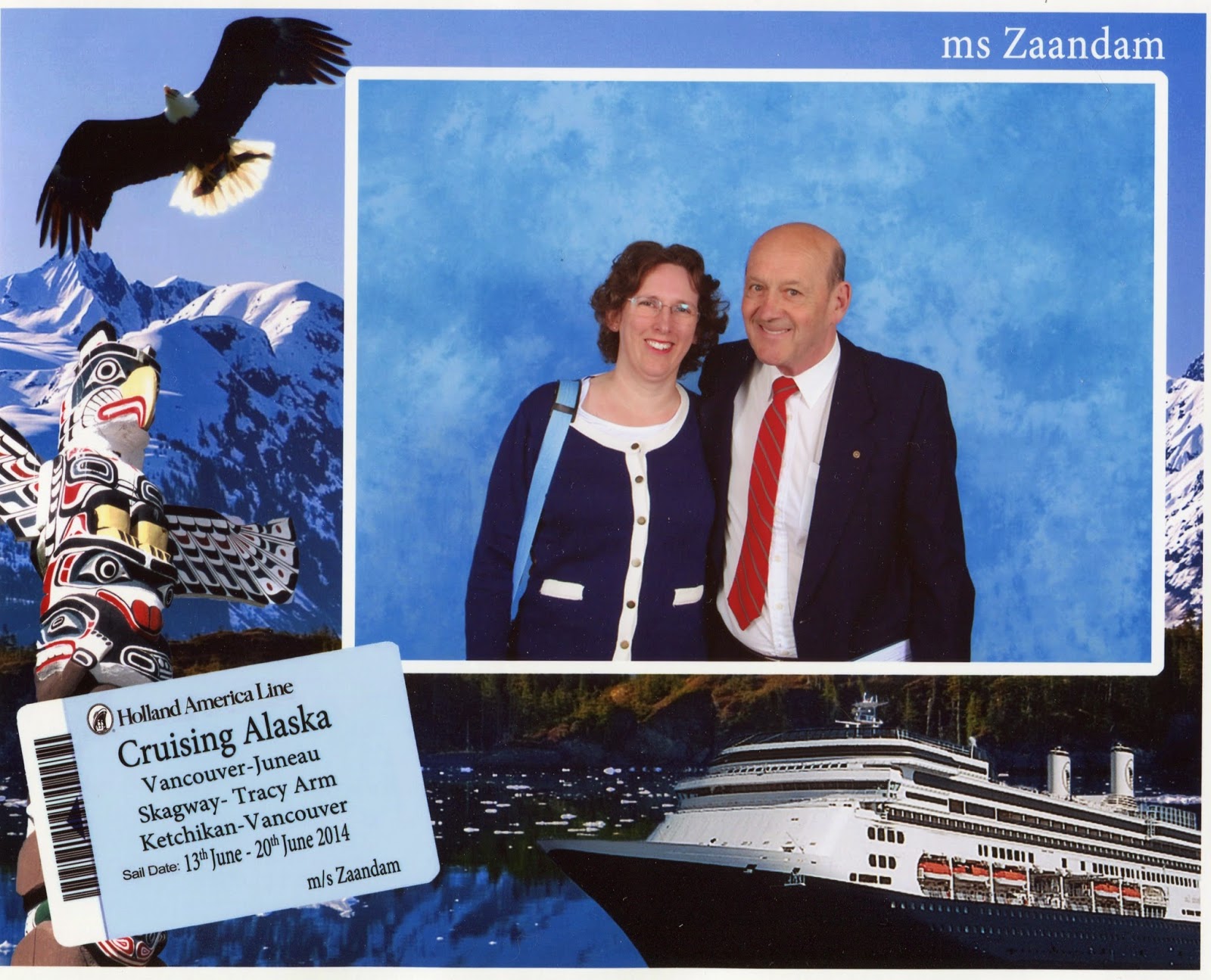 When we presented our boarding pass, we were met with a most pleasant surprise. Having booked the penthouse suite, we already knew we were entitled to be boarded ahead of regular guests. However, we didn't know we would be treated like Royalty! As soon as we showed our tags that showed stateroom 7001, the agent basically jumped from her station, leaving the check-in of the other guests to her colleagues, to escort us personally right on board. The key that literally opened all doors: 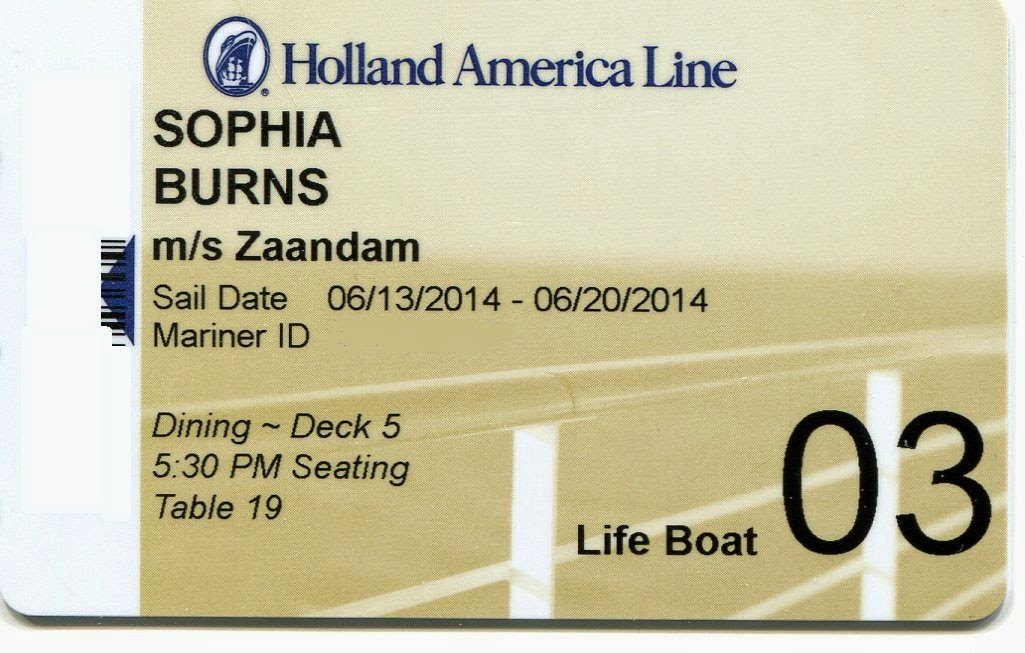 She took us through all kinds of shortcuts and special entrances, to be handed over to our own private concierge Vanessa who then took us to our suite... and what a palace it was!!!

Pretty flowers right across the entrance: 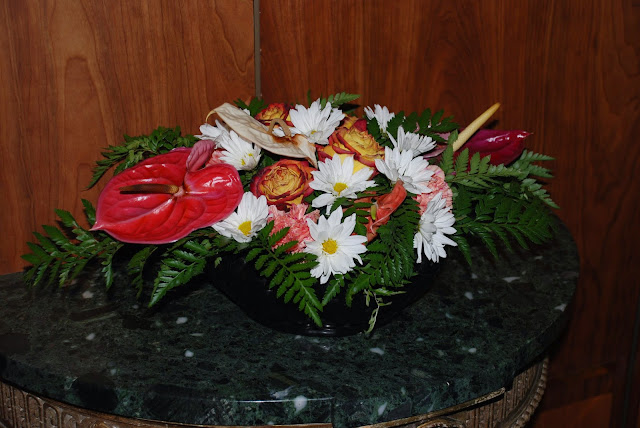 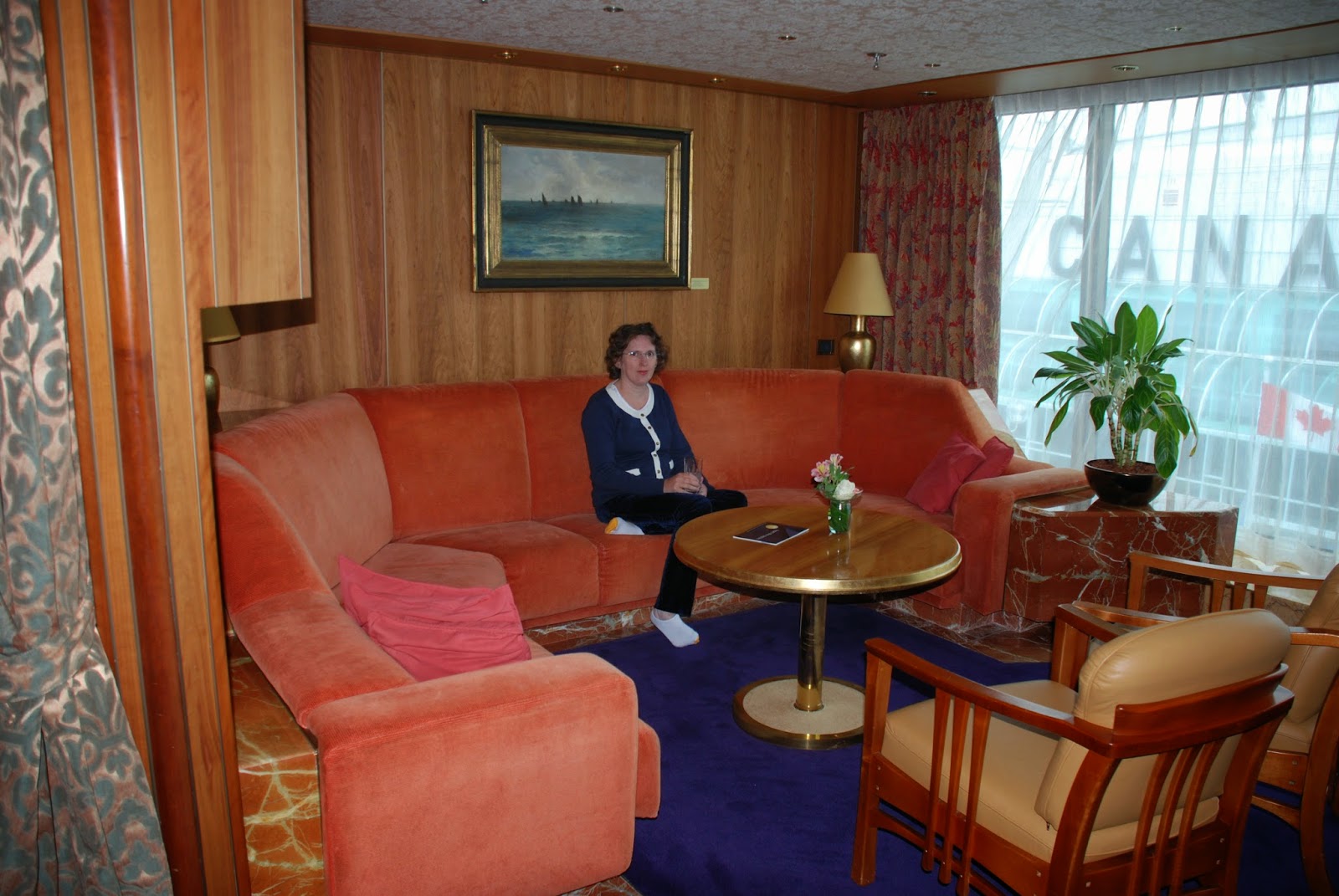 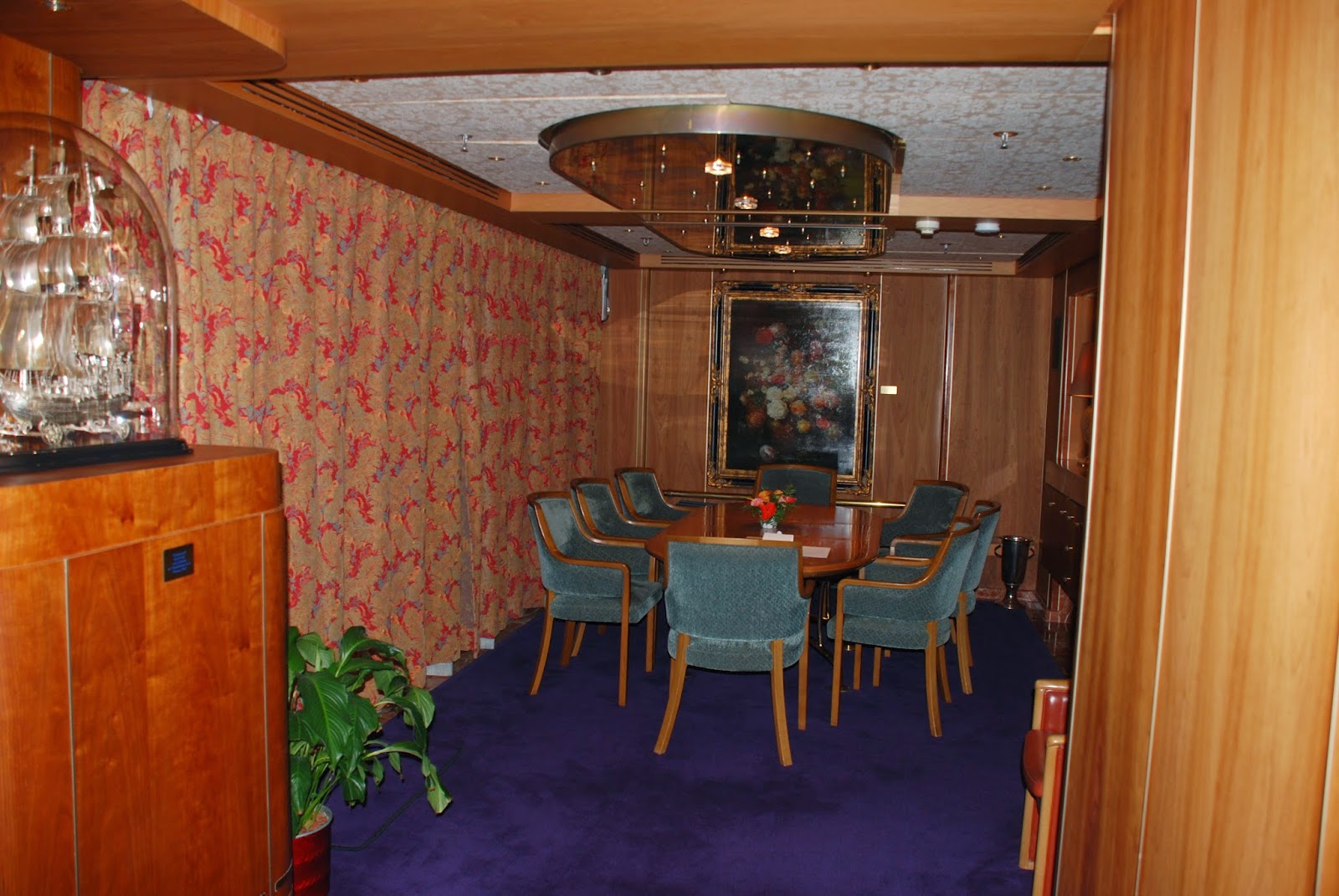 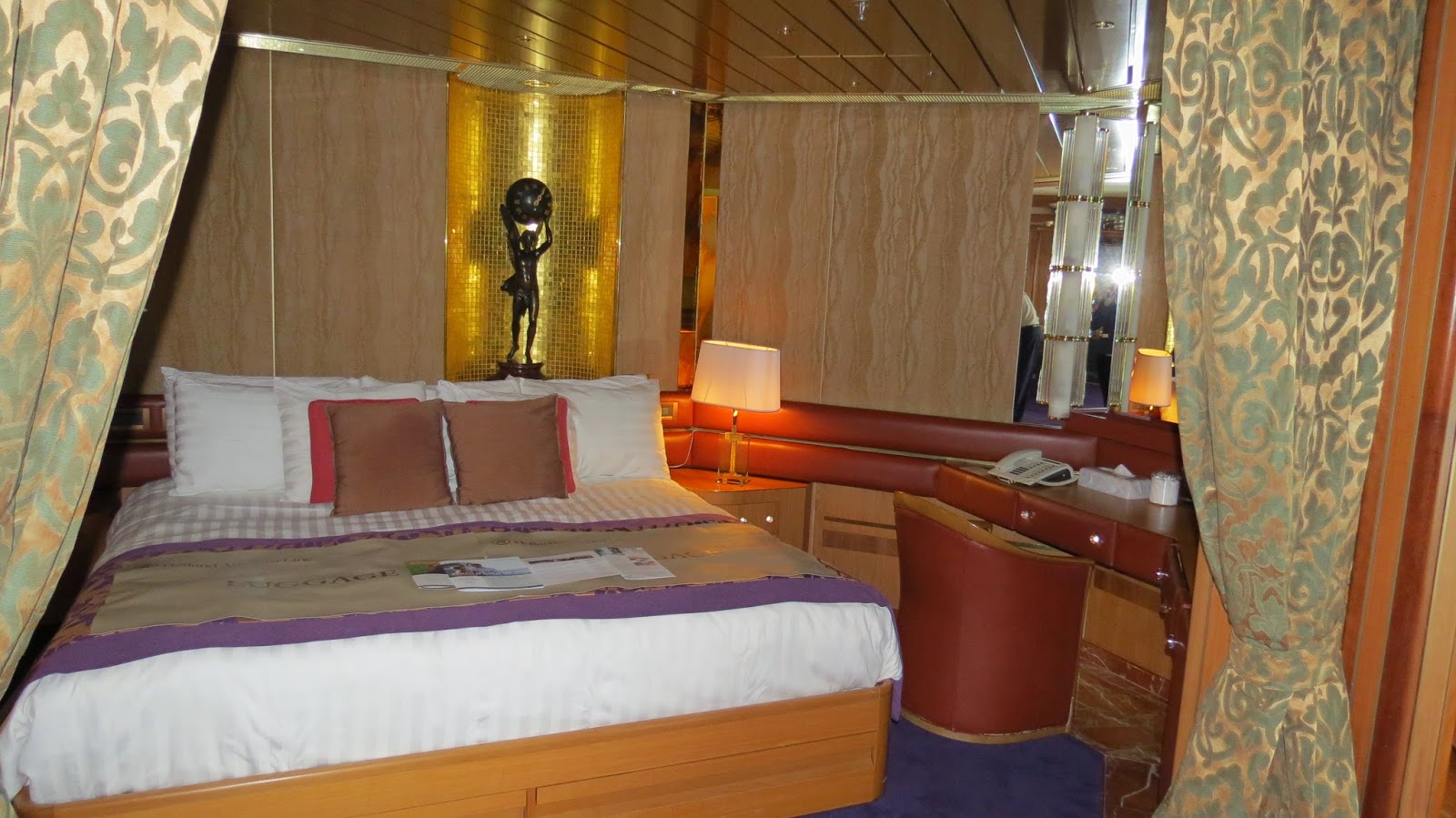 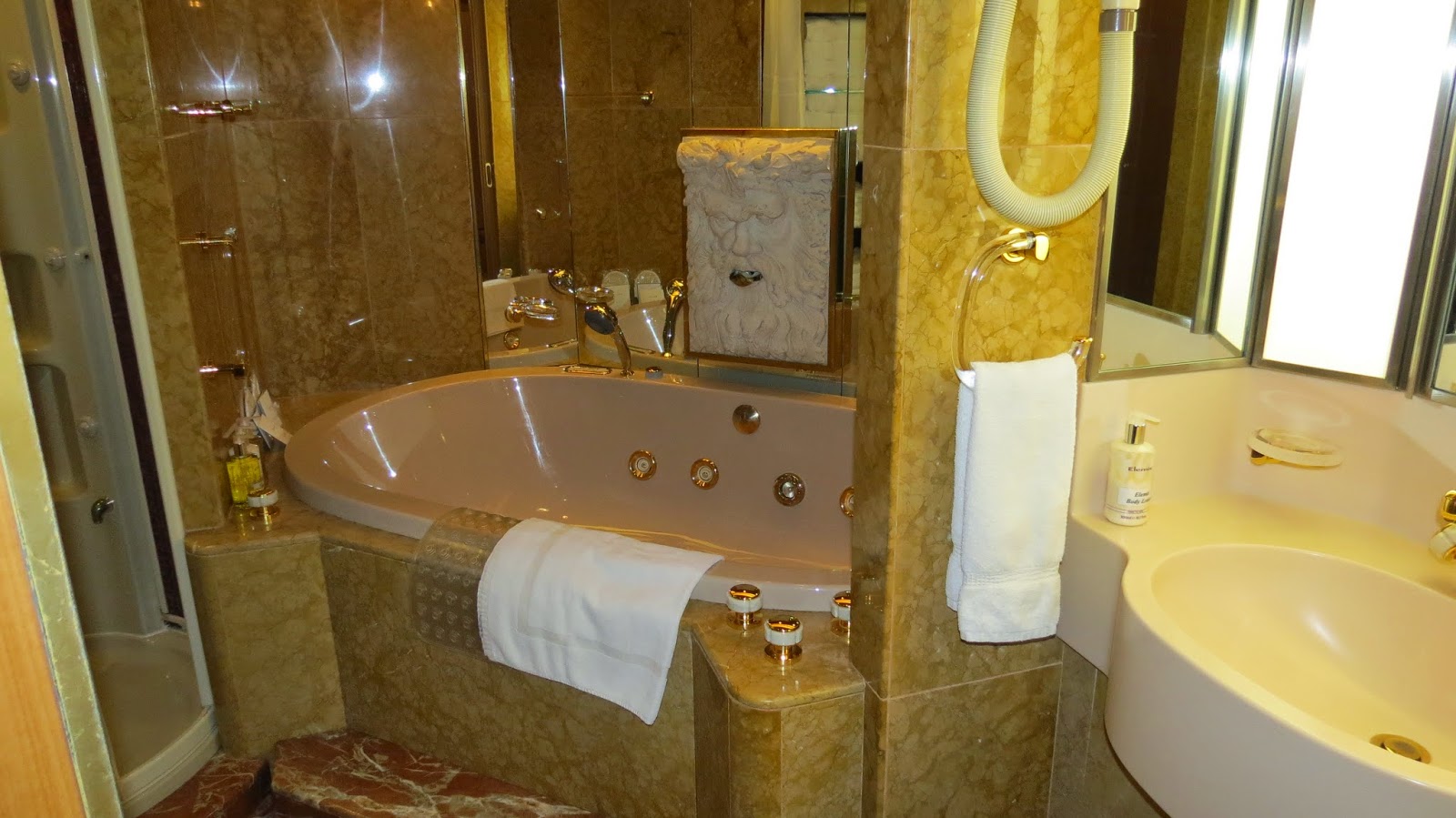 Of course with a his and hers sink! 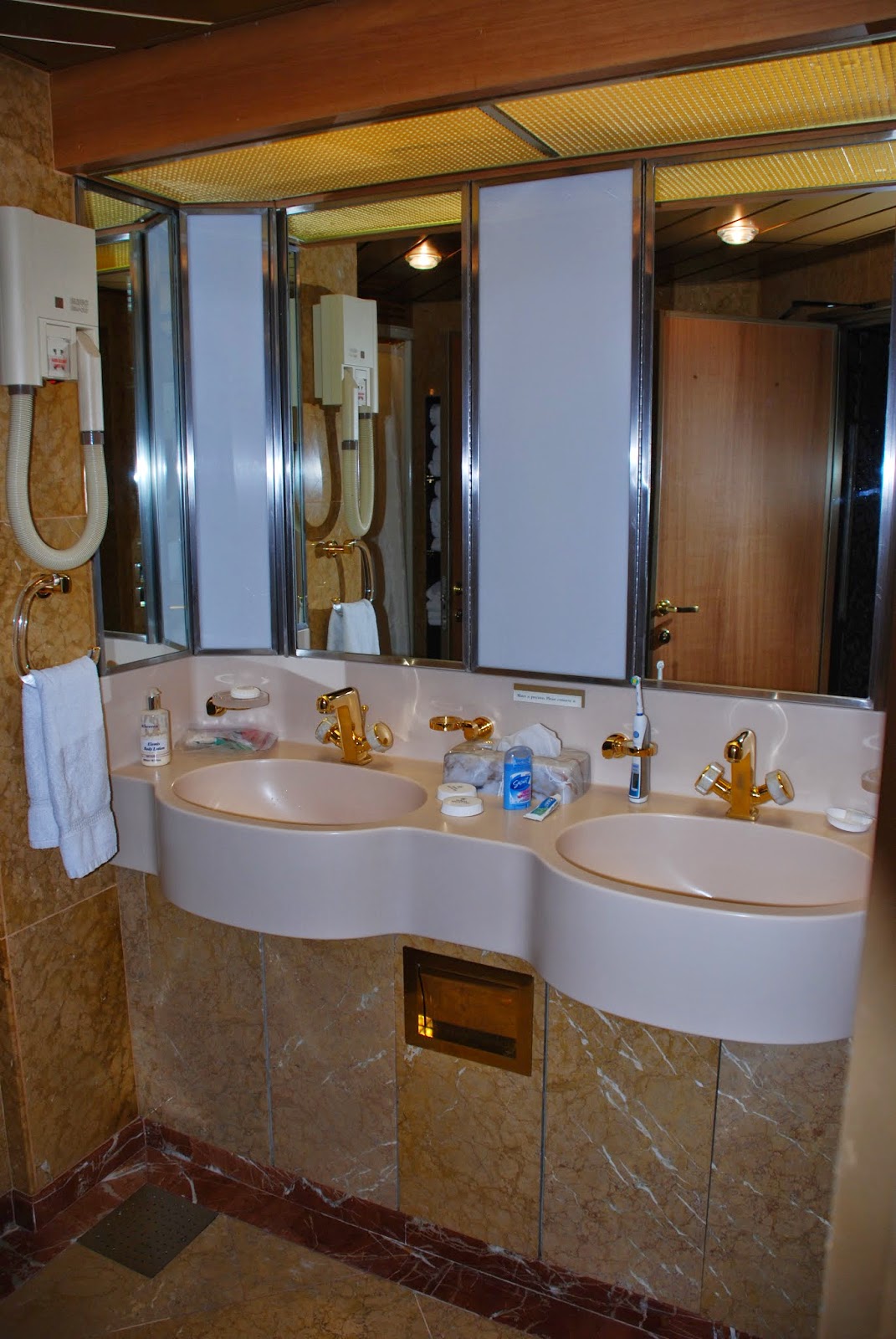 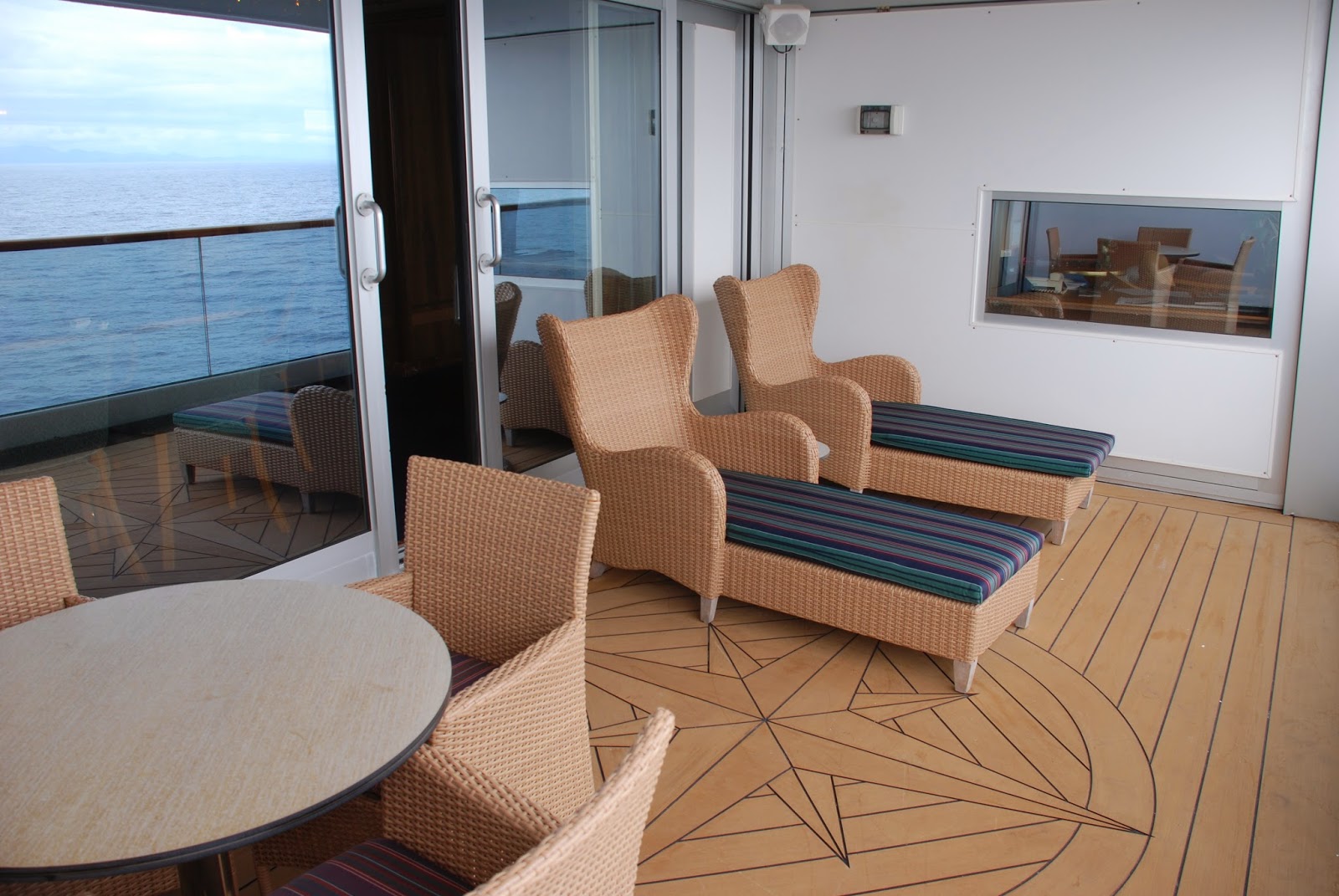 And various pieces of genuine art! 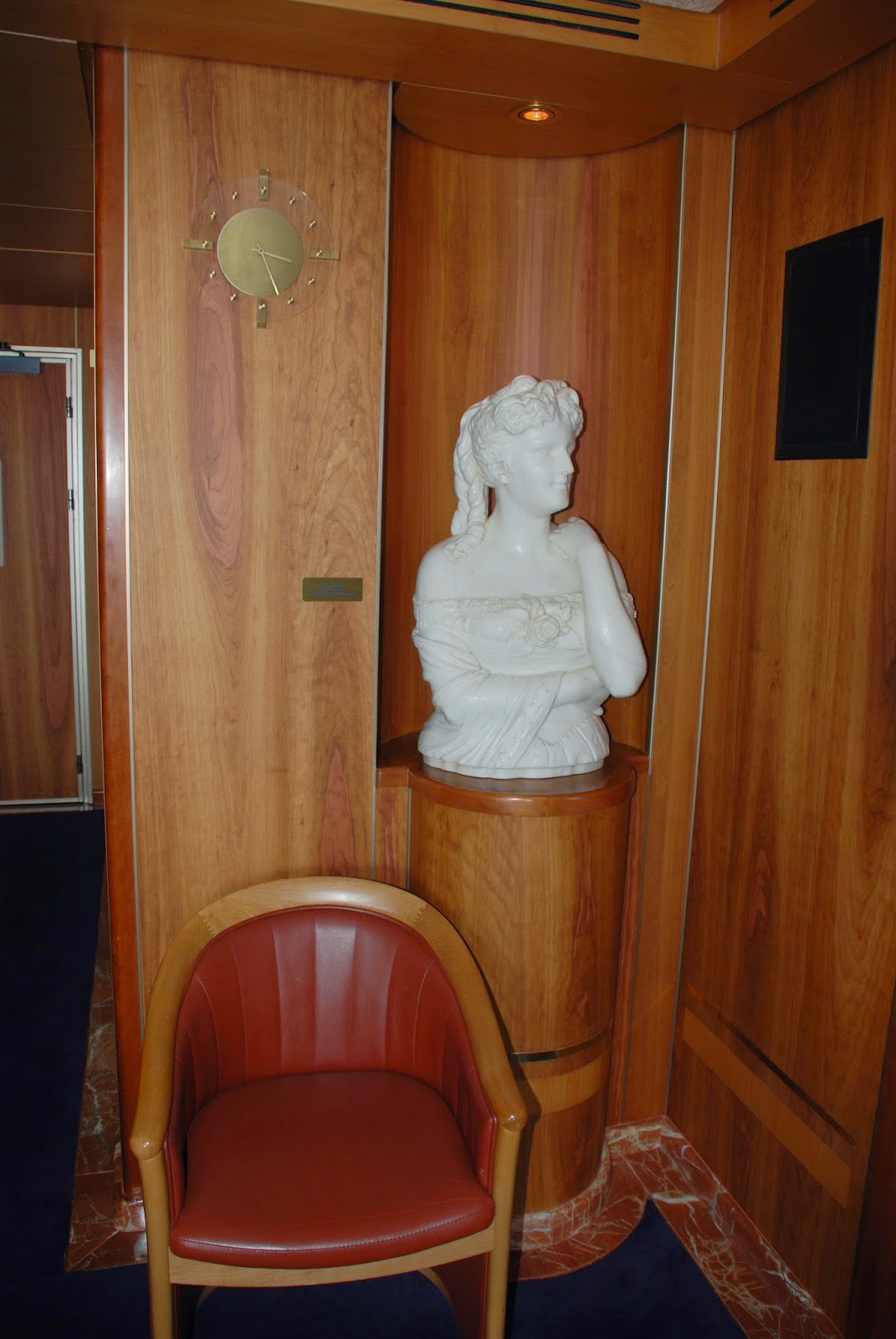 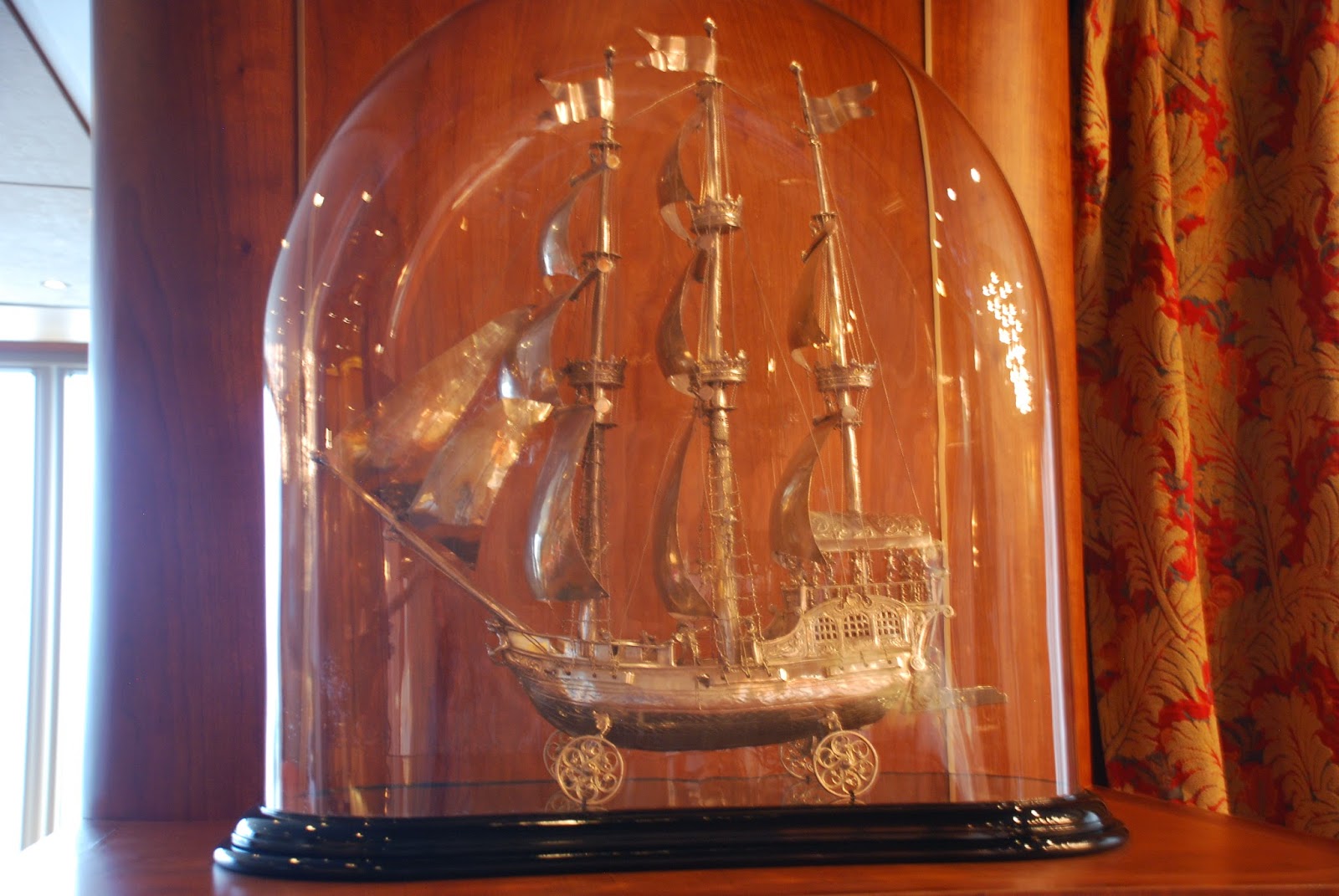 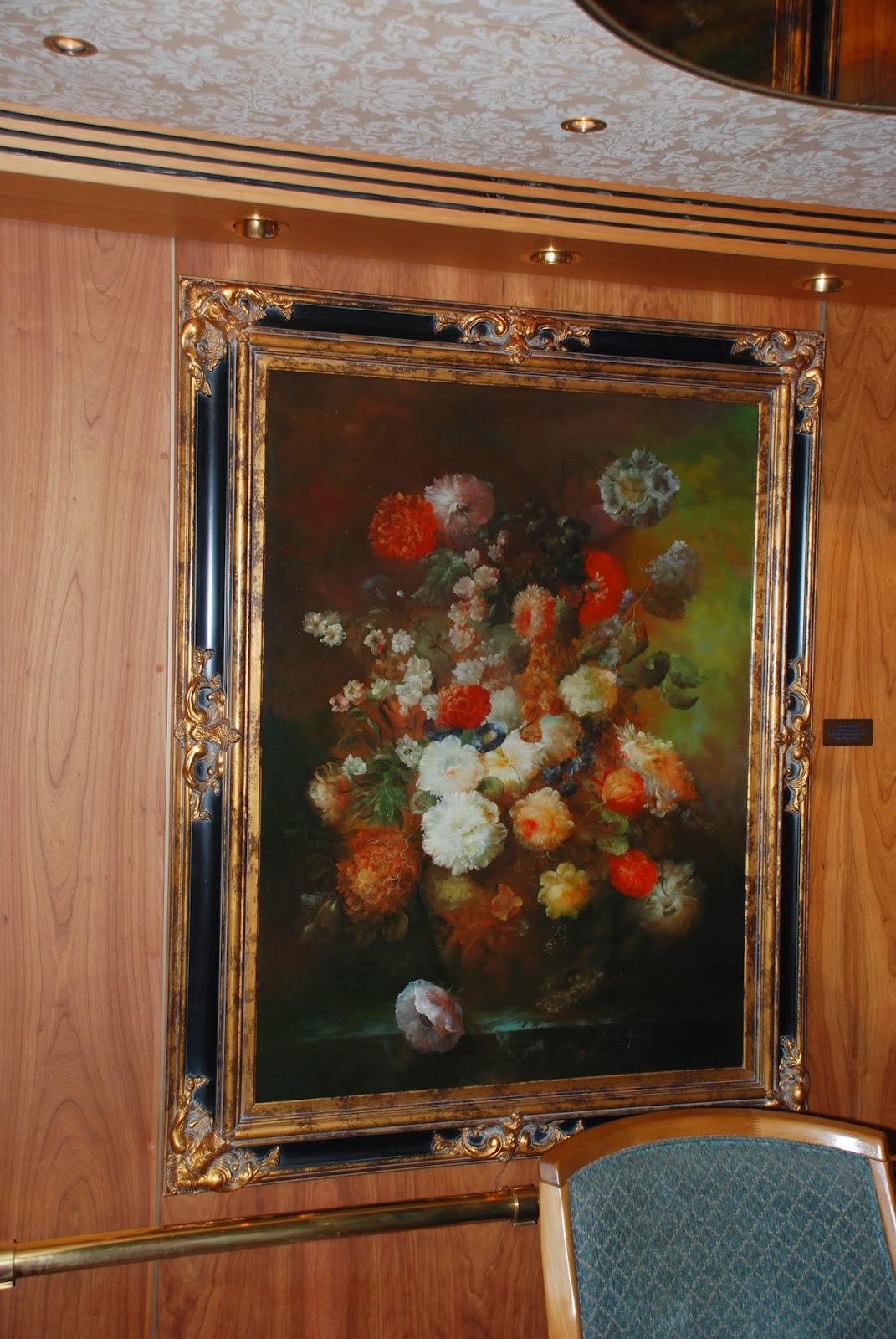 Never had we seen anything like it - it was a suite fit for a royal couple, I haven't even mentioned the pretty flowers, fresh fruit, bottle of champagne and ice bucket, and a private lounge on the same floor. There wasn't much time to enjoy all that yet though.

After our luggage arrived in the room and was put away, we were called for the lifeboat drill. Everybody was told to proceed to their assigned station, to be instructed what to do in case of an emergency. It was mandatory, and it was made quite clear that anybody who refused to attend, would be required to leave the ship before departure.

So down we went with several other meek passengers, to our assigned lifeboat station 3. Once there, we were lined up in neat rows, children in the front, women behind, men in the back. All family names were called and we were to raise our hand and call out the number of attendees. When our name came up, Murray shouted "TWO!!!" so loud that most of the other passengers started laughing their heads off. Murray's Dad is in the Guinness book of records for the loudest human speaking voice in the world, and Mur didn't realize he comes a close second! It added a bit of humour to a very serious situation, VERY serious indeed according to some of the crew, who strutted around like army sergeants, randomly shouting at people to BE QUIET! NO TALKING!!! PAY ATTENTION and NOT TO TAKE PICTURES! All this while we were waiting for the other passengers to show up... so we stood there for the longest time like school children waiting to be told off by the headmaster.

It took a very long time indeed to locate all the missing passengers, so by the time the actual drill was over and we were finally dismissed, we were ready to disembark. Here is me watching the last activities to set the Zaandam free: 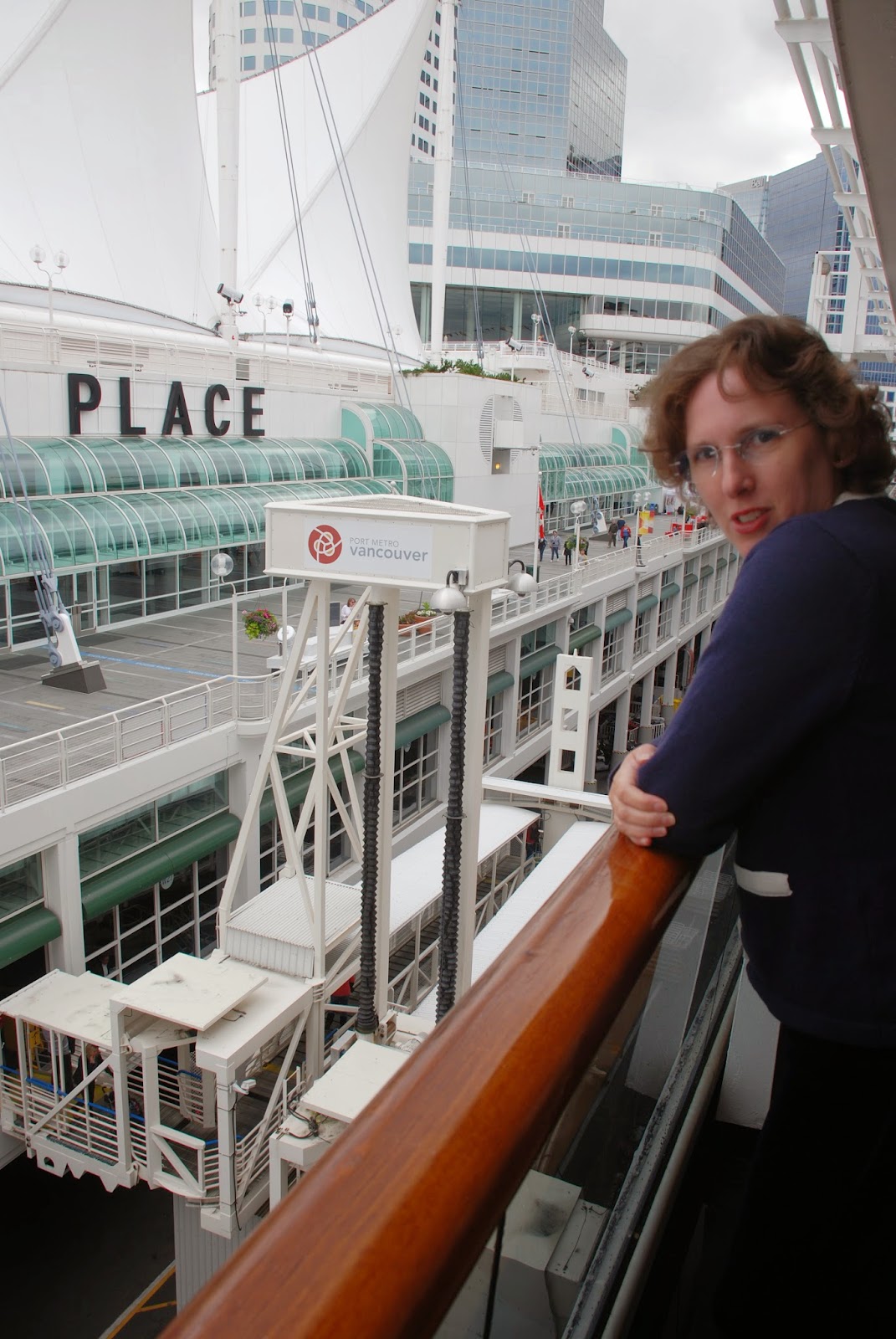 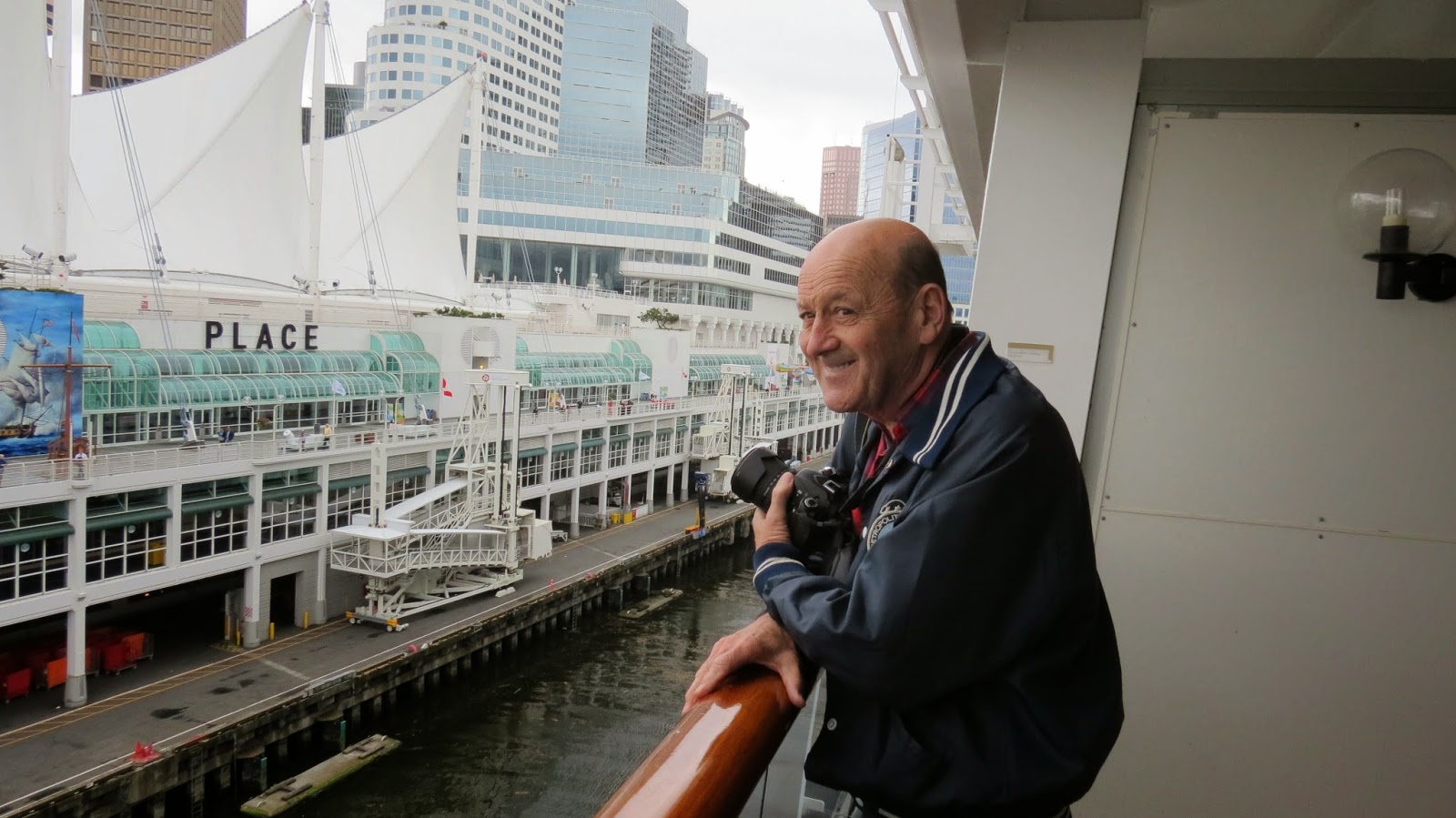 A close-up of the captain in the starboard lookout on the bridge, not only watching the ship leave, but also giving us a private smile as you can see in the movie! 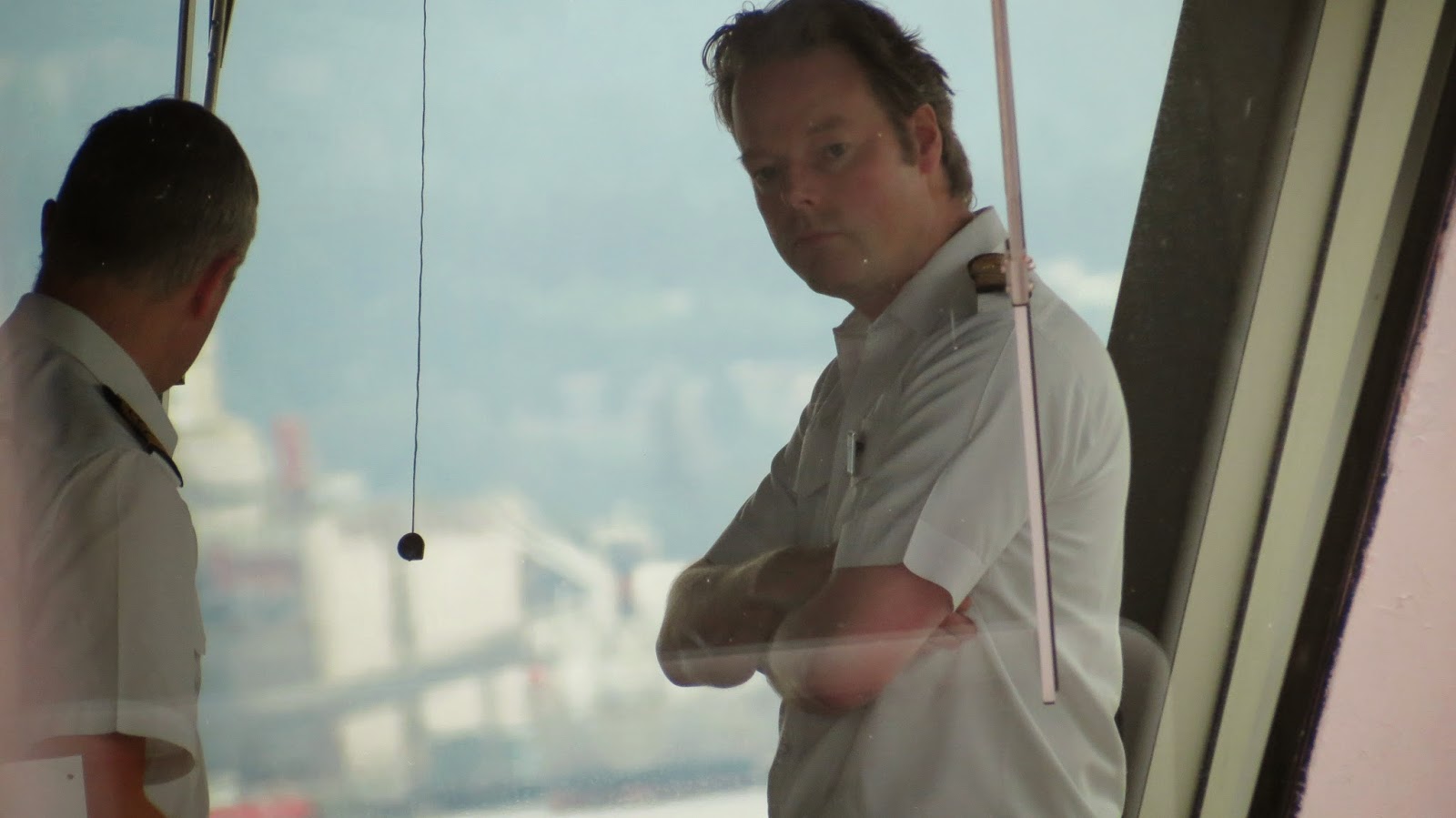 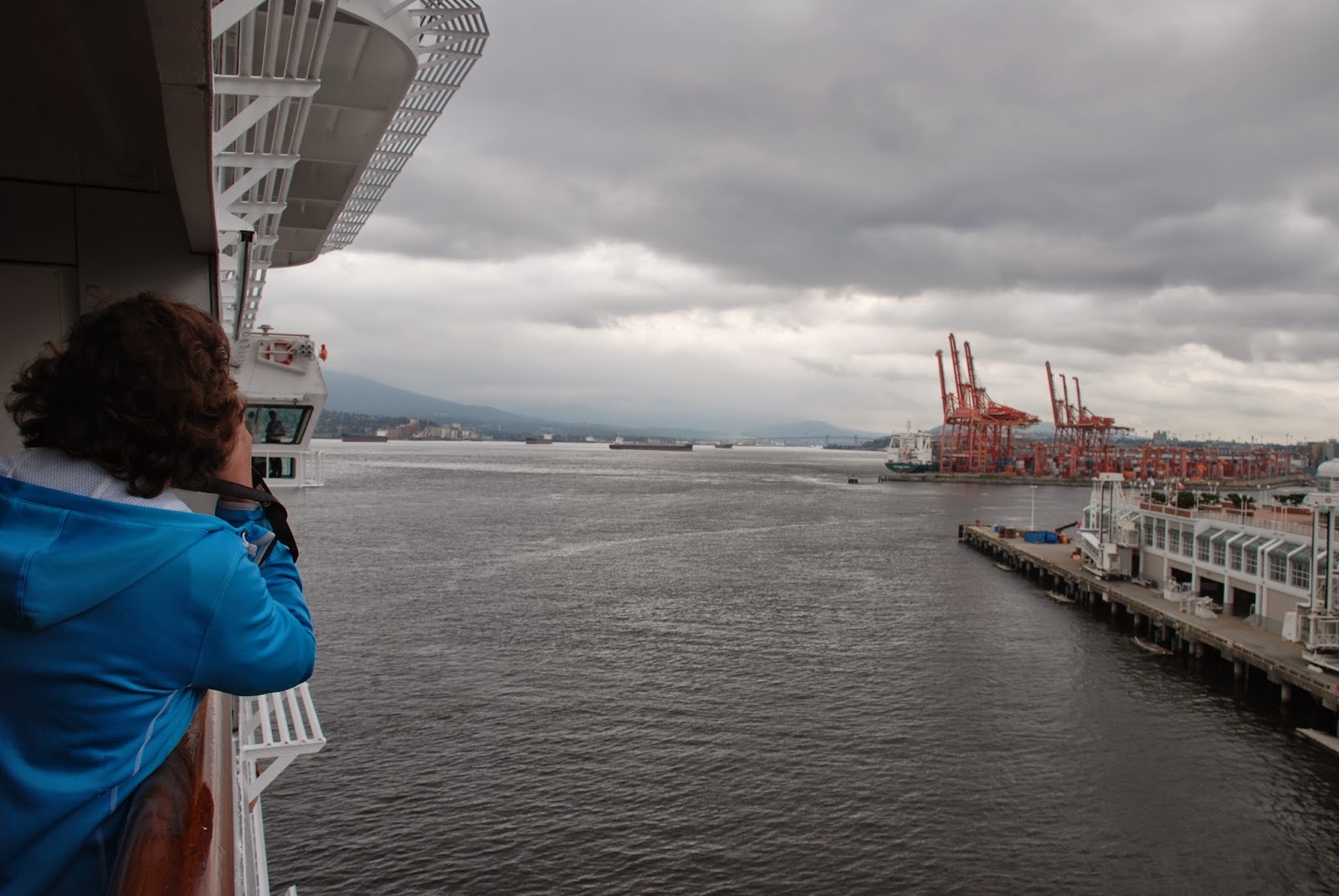 Then it was time for our first dinner on board. We were assigned to table 19 in the Rotterdam dining room for the entire week and expected there at 17:30. It was such a thrill to have supper while watching the scenery glide by outside our window. Much to our relief, we were table partners with the nicest couple one could ever ask for, Lawrence and Neva from Vancouver Island. Supper itself was delightful as well, and the service was impeccable. Eka and Putra from Indonesia were our table attendants for the week. Their humour certainly added to the atmosphere and as far as we were concerned, our cruise was already a huge success. We already looked forward to dinner the next evening! 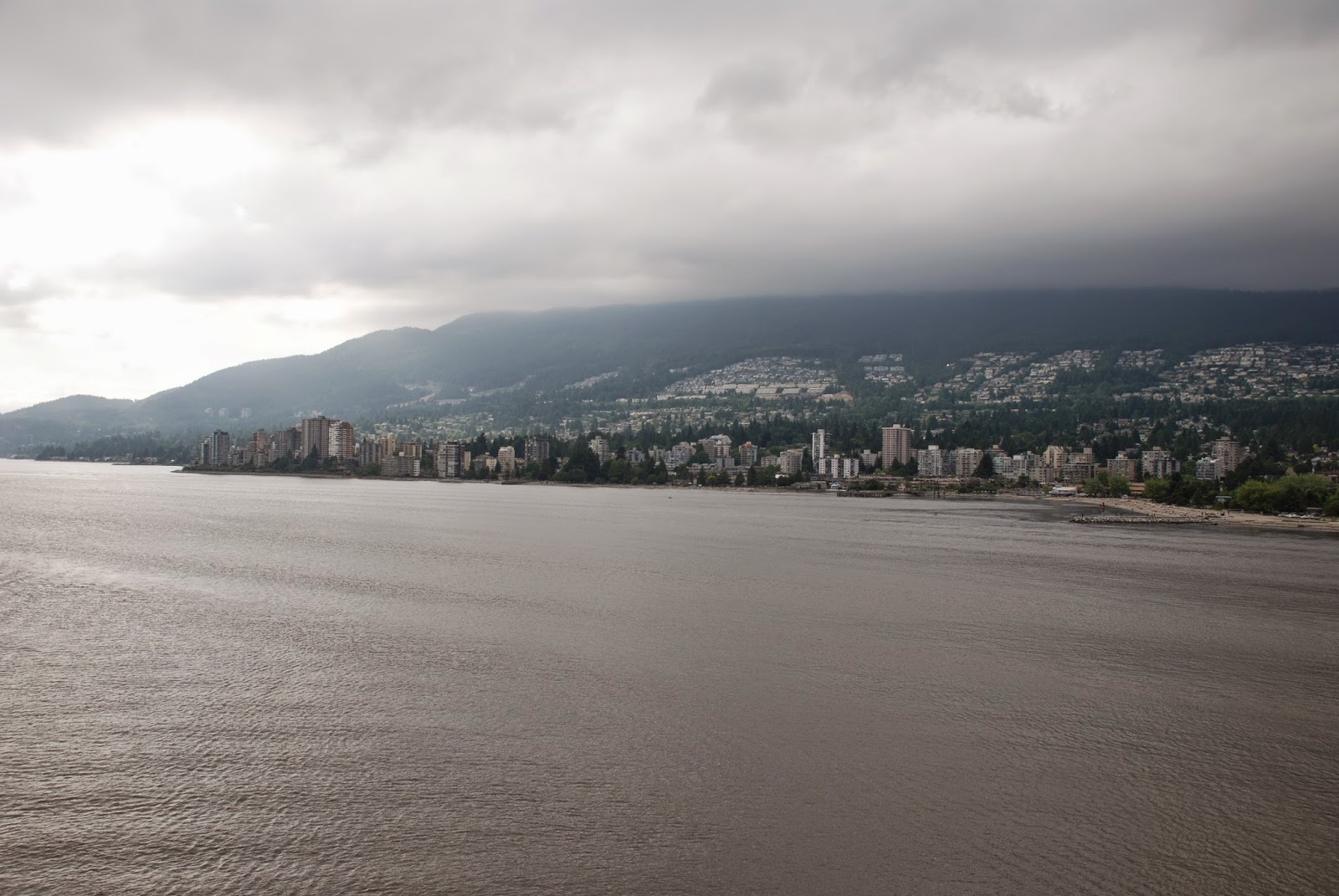 After walking around a bit, we watched a gorgeous sunset from the observation deck. We were both exhausted from the long and eventful day, so we retired early to relax and enjoy or beautiful suite. It was a perfect day, even the weather had cooperated, considering the forecast had called for rain all day long! 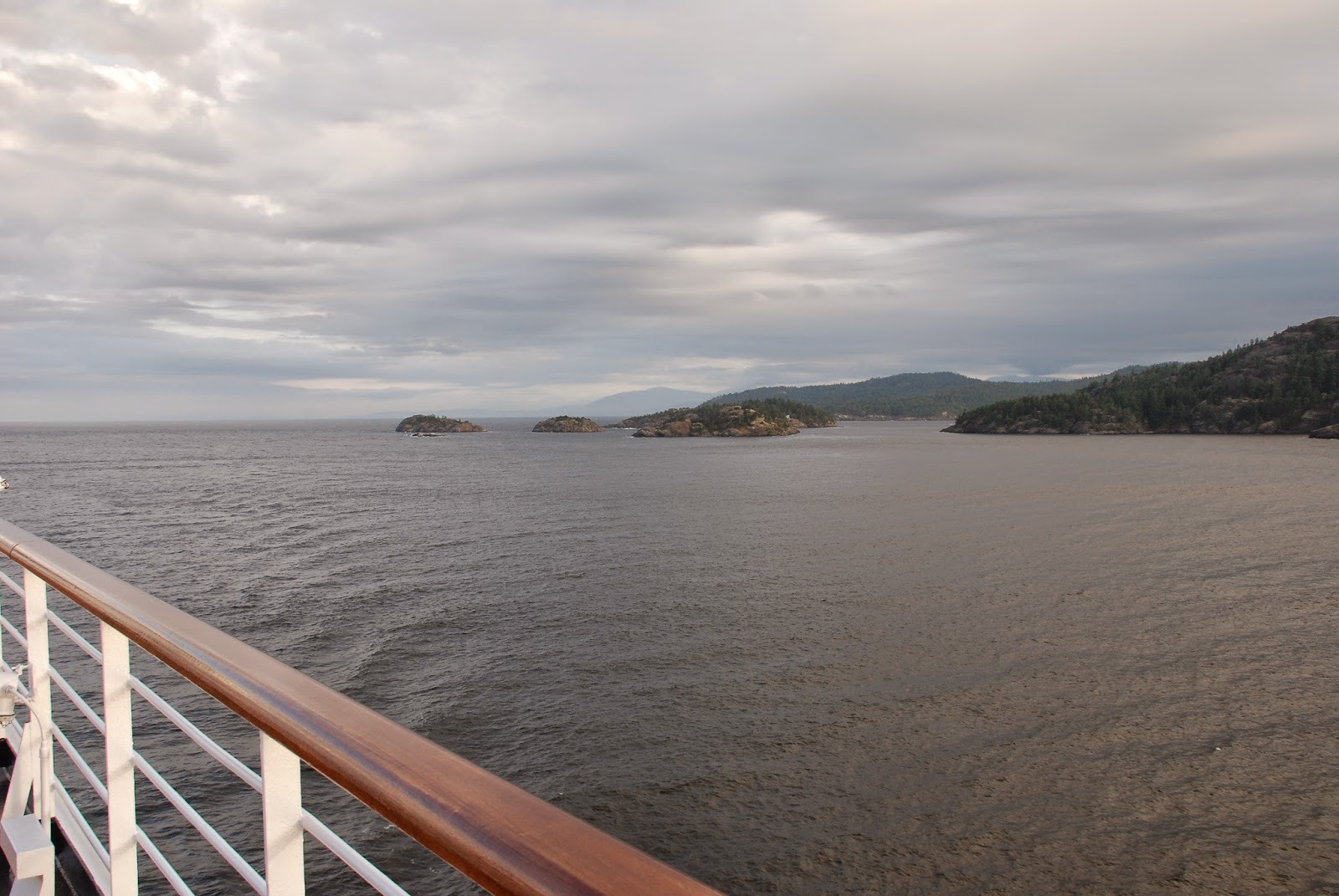 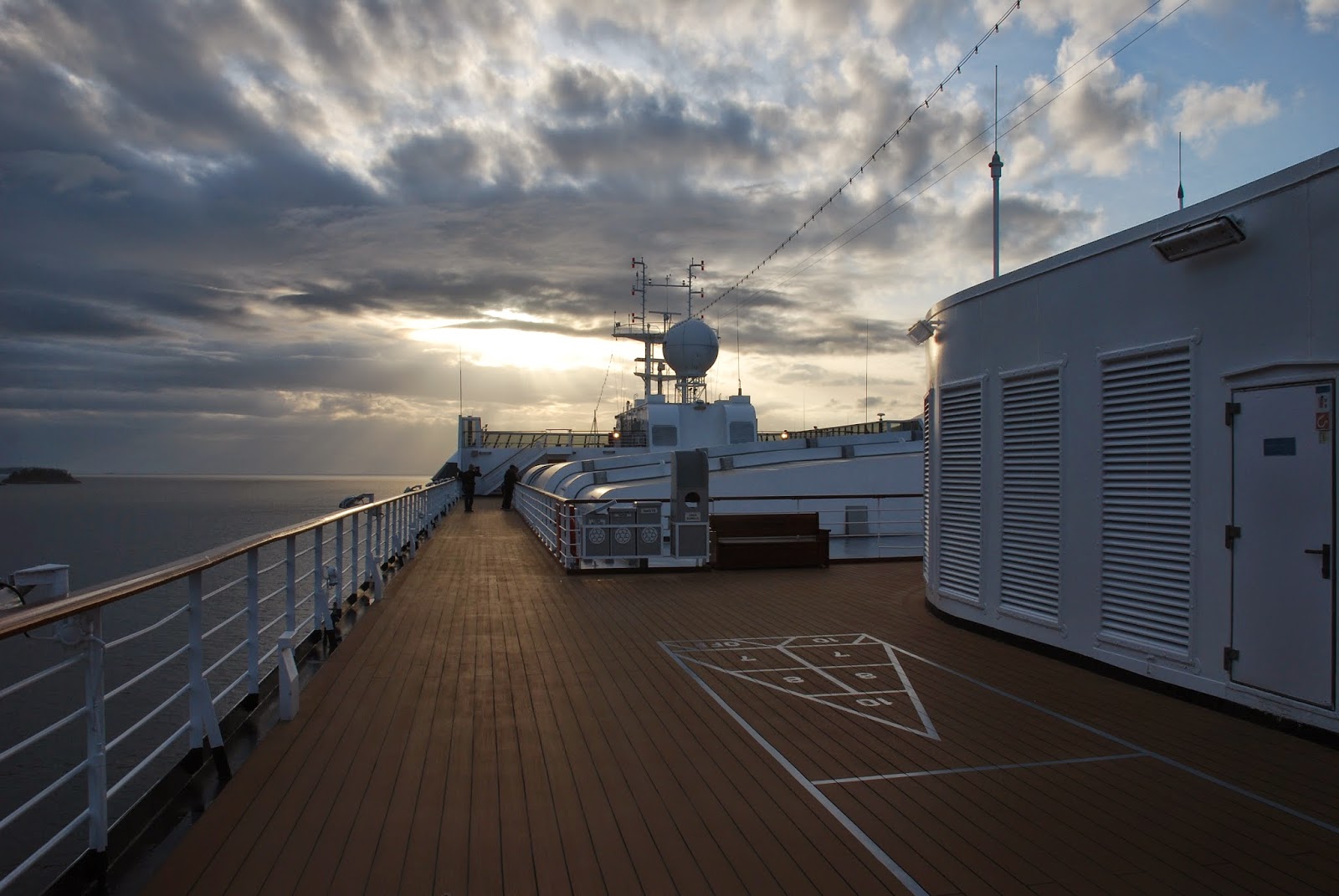 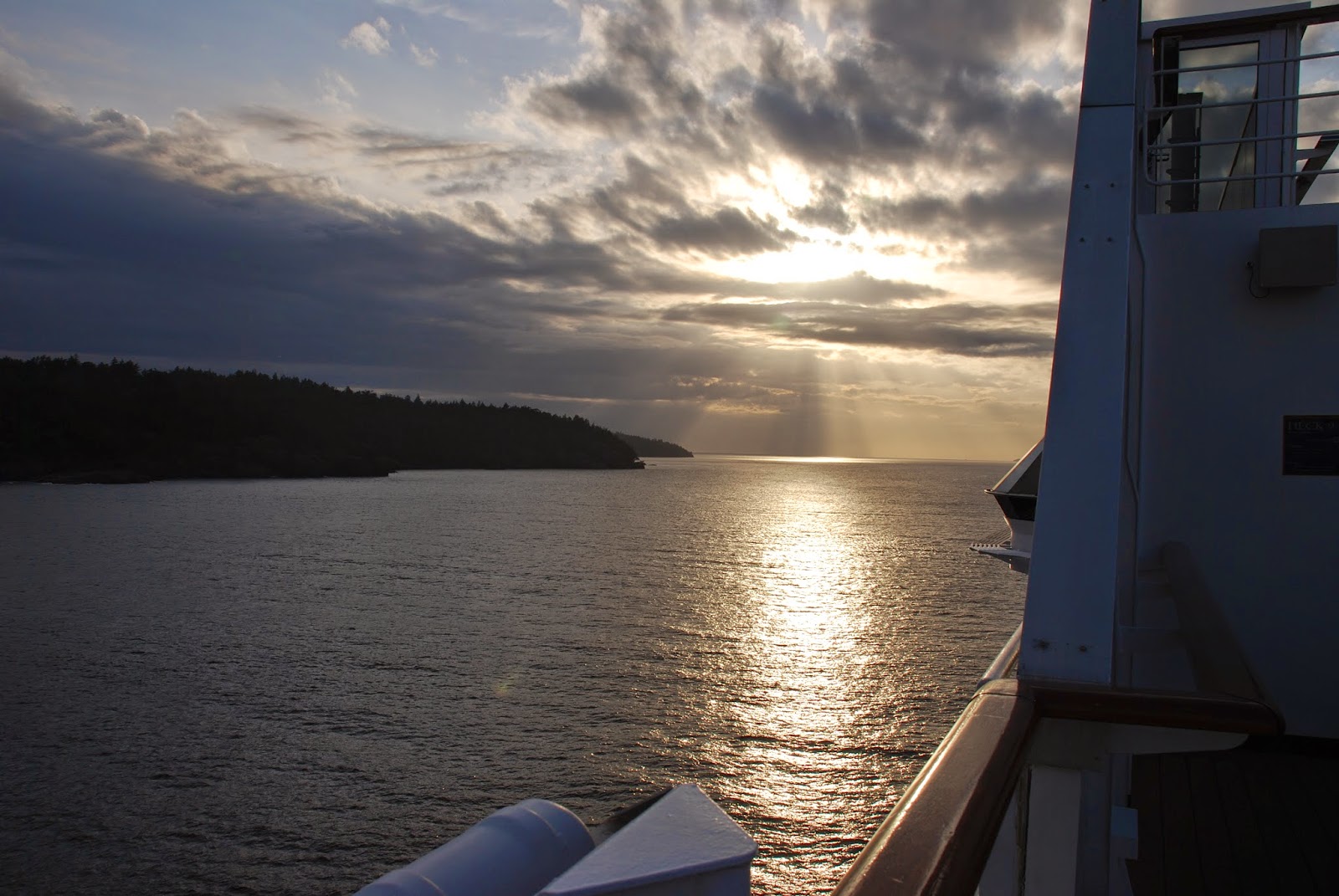