Back to normal life - although, normal???

For just about two weeks now we have been back in Creston to enjoy the relaxed life here. Although, nothing in our life ever seems relaxed for long... our cats, if nothing else, make sure of that!


I guess I'll have to start at the beginning, which was even before our cruise. I just haven't had time to write about it yet. A few years ago Murray was put on some medication that is very good for him, but rather dangerous to cats. It had to happen one day... just a few days before our cruise in fact: Mur dropped one of his pills on the floor. Our quiet, gentle, and usually well behaved Atrus probably thought Mur threw him a treat, because he sprinted towards the pill and before we could even blink, he gobbled up the whole thing.

It was just before bedtime, but we called the vet's office immediately. The vet was kind enough to call us back within five minutes. After discussing the type of medicine and the fact we had already managed to make Atrus throw up, he wasn't too worried about it and told us to just keep an eye on him for symptoms of sleepiness or dizziness. Thank goodness none of that occurred, Atrus was good as new the next day! We inquired about the cost of calling after hours... "Nothing!" was the kind answer. Needless to say a large bottle of his favorite wine was purchased the next day and delivered to Dr Rob! A few days later we were convinced Atrus had no negative side effects, so we went on our cruise still a bit shaky, but relieved. The cats were boarded with our favourite cat boarder, who happens to be one of the vet's assistants. Really, they couldn't be in better hands. We told her that if they needed a vet, she had our permission to do whatever would be necessary.

To keep my cruise posts relatively clutter free I have not mentioned yet that at one point, we received a distressed voicemail from her to contact her immediately: Atrus was okay, but Mouse had fallen seriously ill! He was so sick in fact, that he was in the vet's hospital on an IV drip... though by the time we got into a port and finally managed to call back, he was already on the mending hand and back at her boarding place. Did we have many anxious hours!

Although we never did find out what was wrong with Mouse, we were happy that all is well that ends well. We continued to enjoy our cruise and by the time we picked up our cats, Mouse was his old self again. We'll still need to go back in two weeks to have his blood checked again, but everything seems fine. He has been on thyroid medication for the past 6 months, so a check up was necessary anyway. 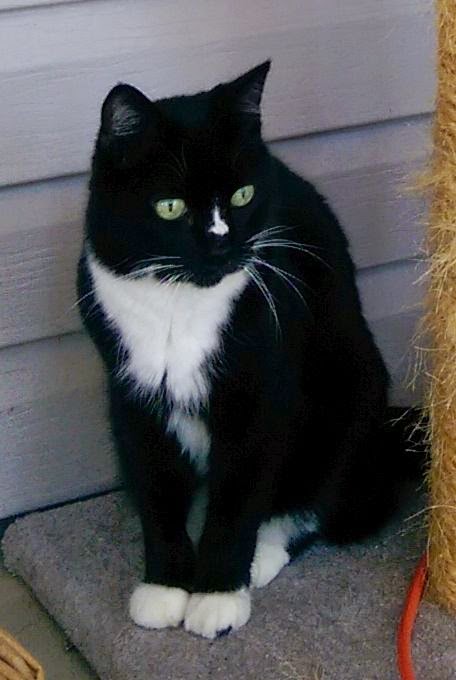 Fast forward two more days. We were finally getting back in the routine of being home again. That evening we were outside in our screened in porch area with our cats, watching an episode of "Midsomer Murders" on Netflix. Mickey got up from the chair he was sleeping on, and I noticed right away that he walked as if he needed the sandbox (being a good cat Mommy by now, I have learned to tell these things). Mickey has always been a cat to use anything but the litterbox if a choice is presented, so I was quick to put him in the catbox. Strange... he just stood there almost for a full minute, and the big waterfall we usually get from Mickey, was not heard.

We weren't too alarmed just yet, after all, Mickey is Mickey. But when he left the box, his legs suddenly gave way. He flopped to the floor, growling in pain and in obvious distress. Hoping it was just a temporary cramp, we waited a few minutes but when we saw how much difficulty Mickey had walking, and in how much pain he seemed to be, we didn't hesitate to call the vet's office. Again, dr Rob called us back within minutes. After hearing Mickey's symptoms, he did not beat around the bush. It sounded like a blocked bladder, which is a life threatening situation. He needed to see Mickey right away! So, at 9:30 pm that evening, we raced poor Mickey to the clinic. After a quick examination, Dr Rob confirmed that there were numerous tiny bladder crystals blocking the ureter. Luckily, we had brought Mickey just in time to prevent bigger problems and before his bladder was in danger, so only a minor operation was necessary. Several days later we were finally allowed to pick him up again, good as new and with a brand new diet that is going to set us back more than it costs to feed ourselves. Our Mickey is worth it! 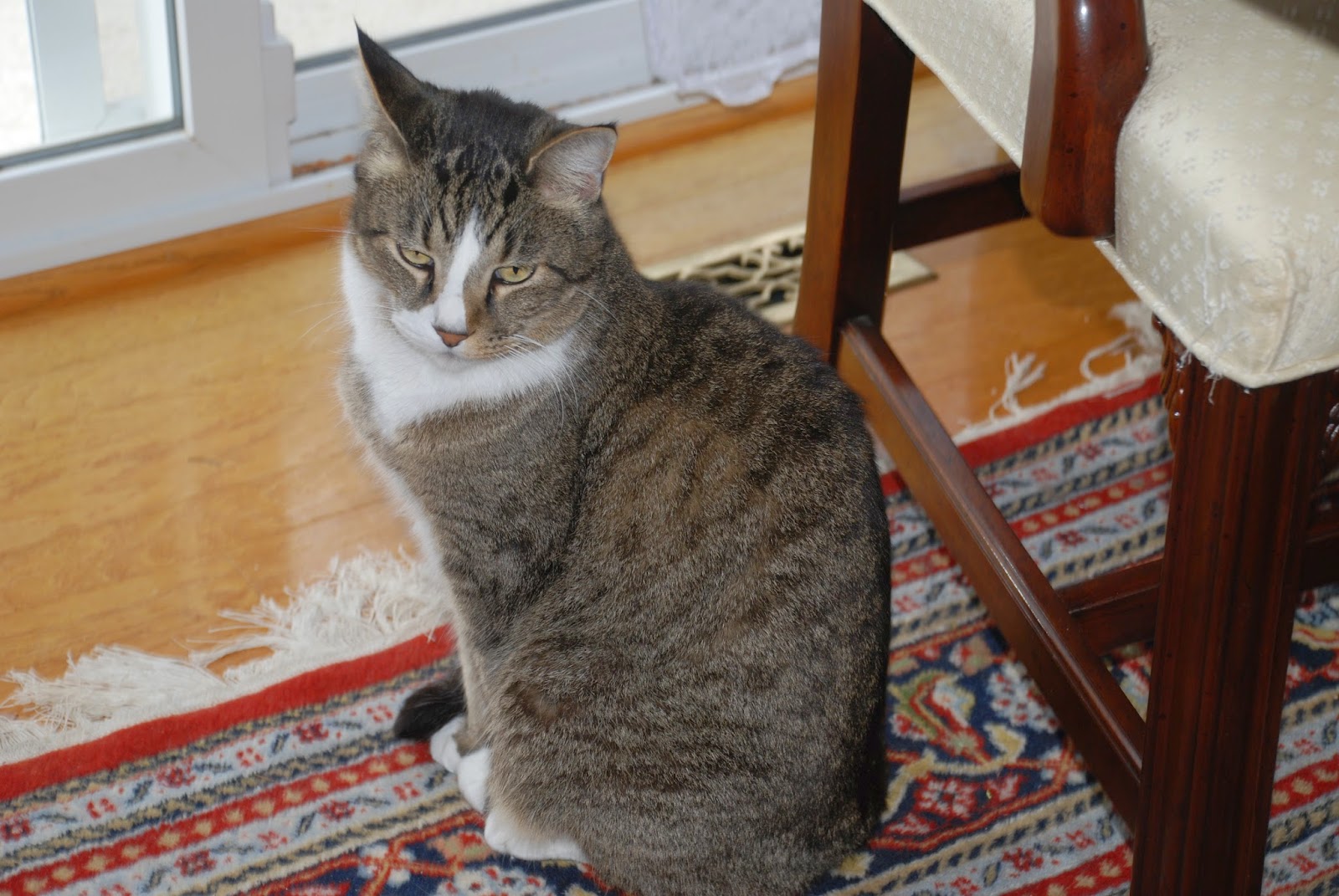 The day before Mickey got his blocked bladder, we hadn't quite recovered from our cruise yet. Exhausted, Murray had already fallen asleep and I was still awake. Normally we lock the cats in the bedroom with us, but it was still early and I had not done so yet. It was quiet in the house... I was reading... then suddenly I heard CRASH! CLANK! Prrrrrrrrrrrrrrrr (sounded like a giant bag of rice falling). I looked up to see three highly alarmed faces, yes, Mouse, Mickey and Atrus were right here and innocent as can be. Puzzled too. What were those two rascals up to now?? Mur still asleep, the four of us went investigating.

It took me a long time to finally find out what had happened: they had upset the stone vase with silk flowers in our anteroom to the theatre. Murray had filled it with glass beads to stabilize it and make it heavy enough so the cats could not pull it over, but it wasn't Aby proof, obviously! It had broken in several tiny shards. There were glass beads EVERYWHERE, even halfway up the stairs! It took me half an hour to pick up all the bits and pieces.

Two days later, Mickey still in hospital, I was actually writing this very blog post when again, we heard a big crash from downstairs. We had forgotten to close the door to our music room and library, and paid a high price for that too. Not only the flowers in there had been upset and scattered all over the floor, my Tascam, wires, sheet music, pens etc went flying everywhere. Another tremendous mess to clean up... Abyssinians! And I know for a fact it won't be the last time that this'll happen either! Don't they just look sooo innocent? 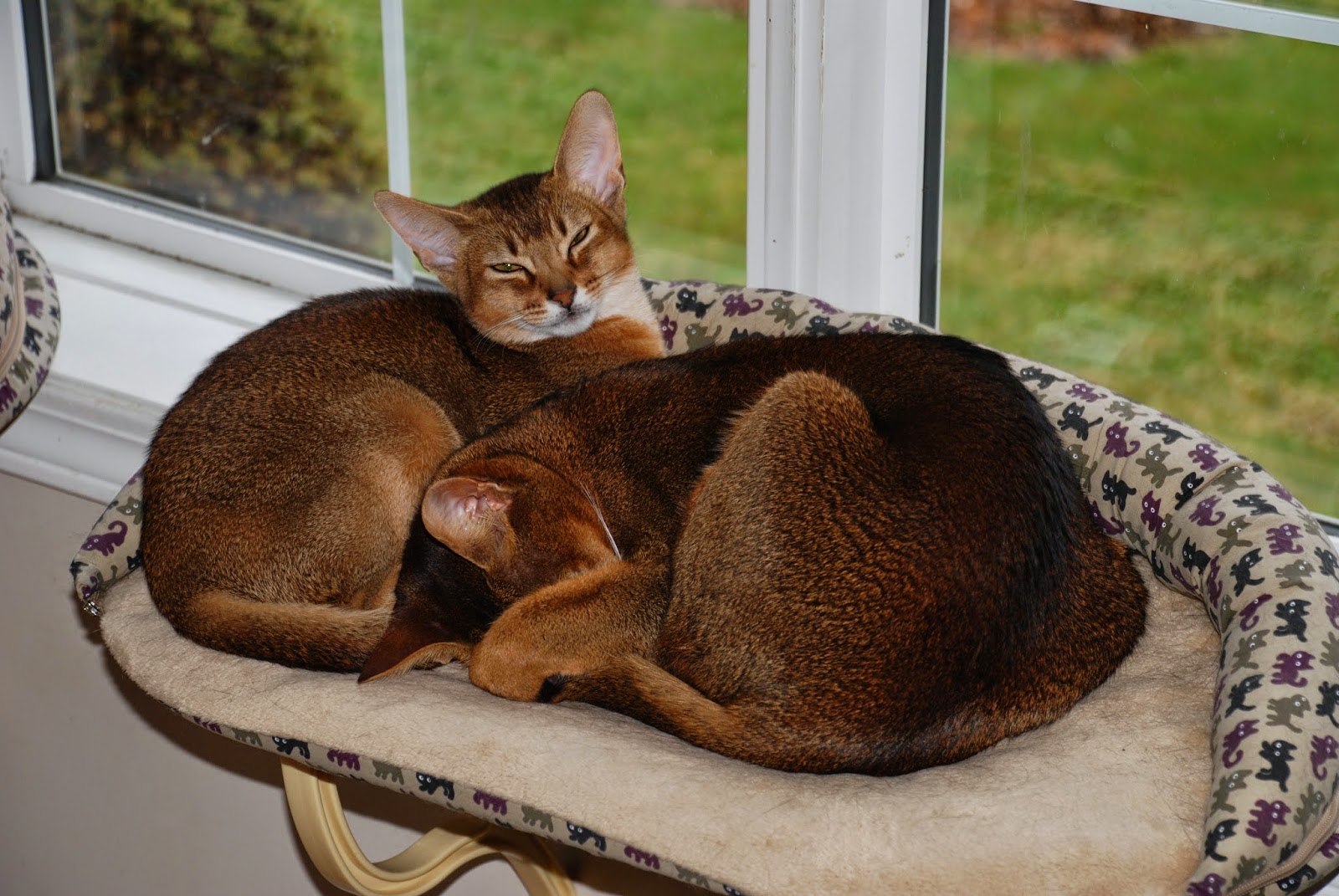 After the vet bill and other cat expenses our wallet was well into four digits lighter, but we are happy to say that all our cats are back in good shape. Having spent so much already, we decided to indulge in one more expense - their very own outdoors carpet tree. Here they are inspecting their new toy, oblivious of all their mischief... Cats! You gotta love 'm!

Oh before I finish this blog post, let me say that all five cats are back in excellent health and in terrific moods. No cats were harmed in the writing of this blog post (though I wish I could say the same about our furniture and wallets!) :)

Now we need another vacation to recover from the cats...
cats
Location: Home