About a week ago we looked outside our window, and we started wondering where the mountains had disappeared to.

Everything was hazy, it smelled smoky. We found out there are several forest fires in British Columbia and Washington, causing the widespread smoke. Here a few pictures, the nearby mountains are completely blue, and the ones further away invisible. We both experienced burning eyes and dry throats, and we couldn't see the sun at all, a rather scary experience really... but there is nothing to do but wait it out. We certainly heeded the Government's warnings to refrain from strenuous exercise - it was too hot for that anyway. 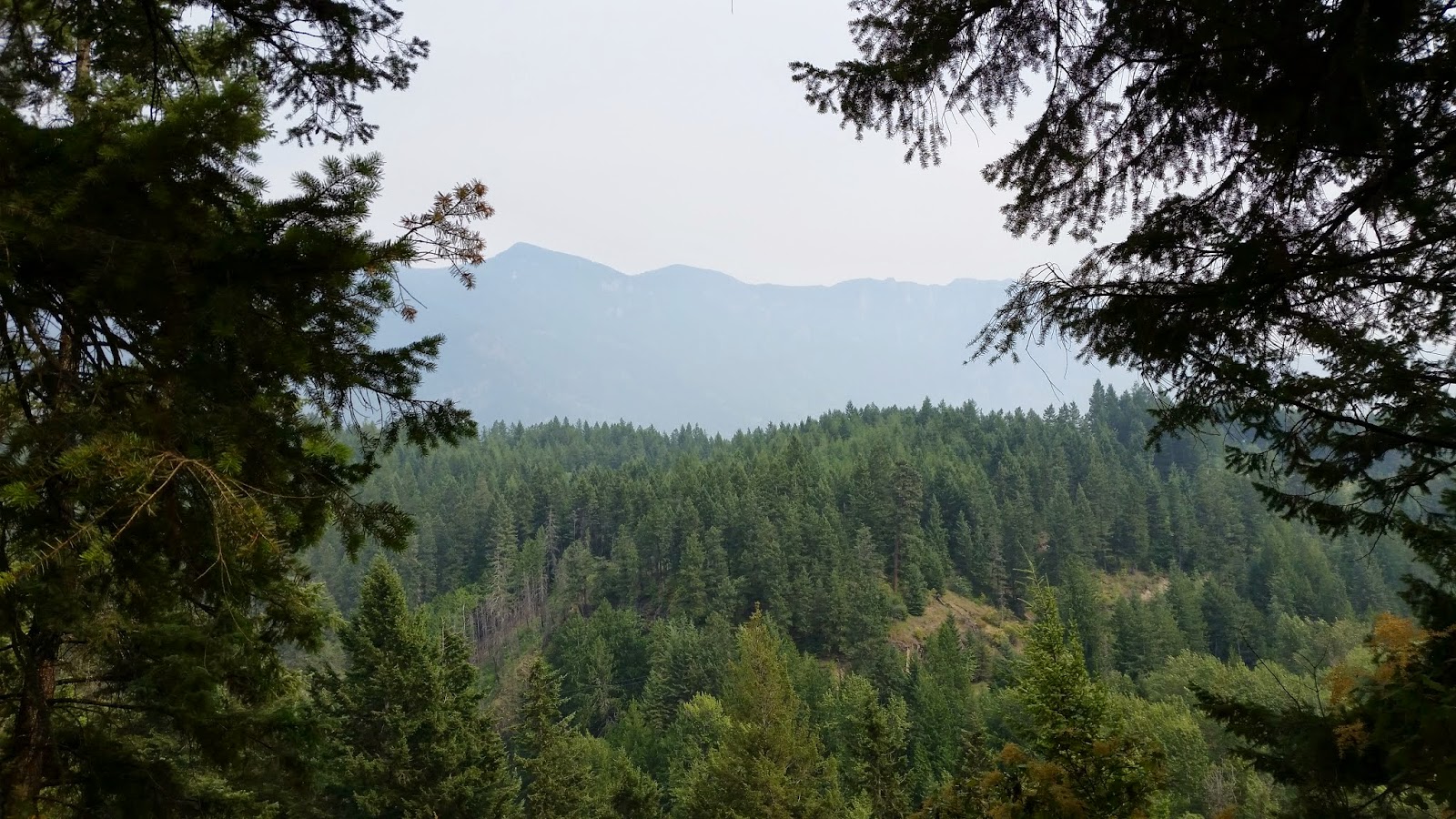 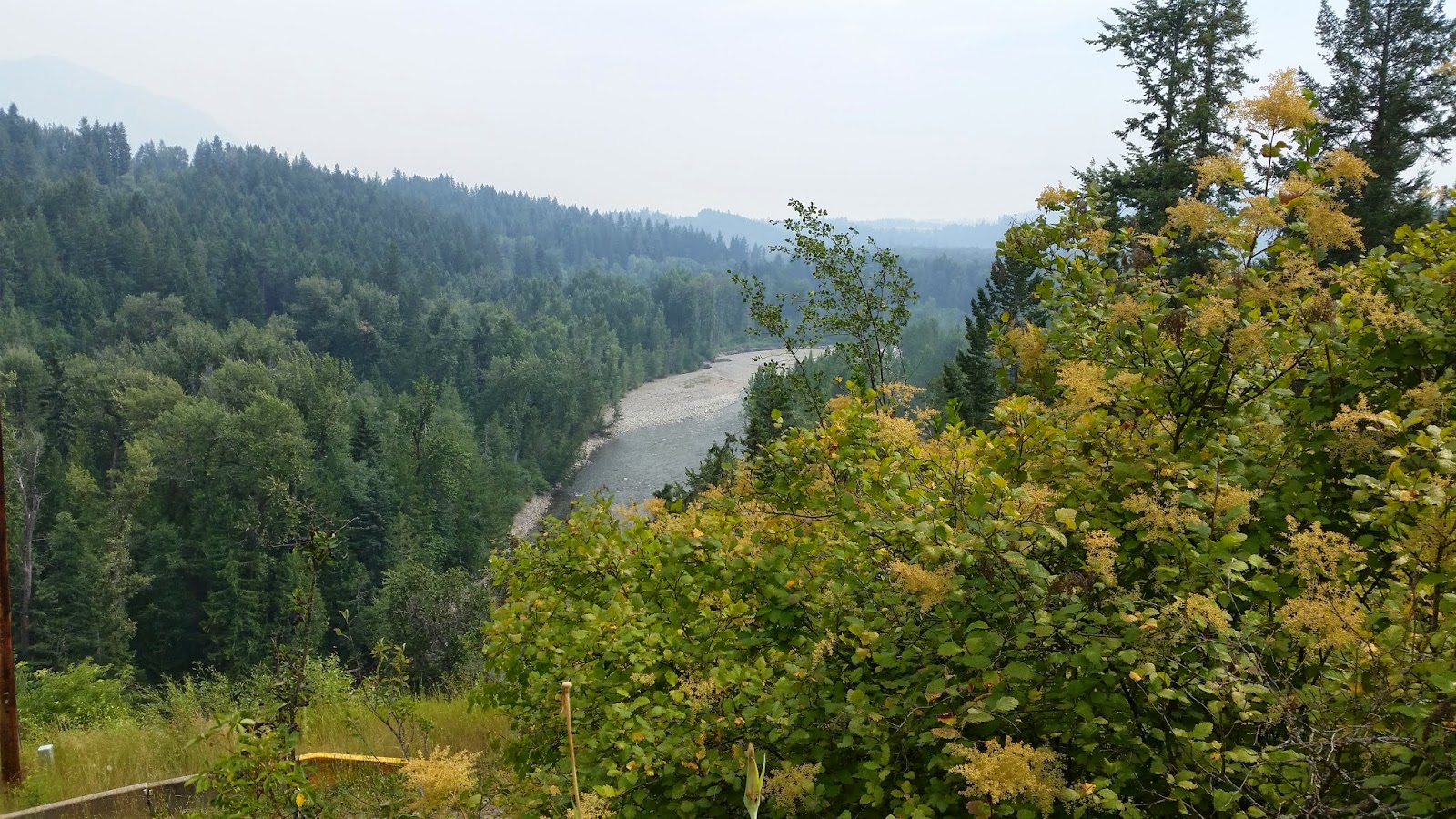 Thankfully, as of yesterday the smoke seems to be disappearing and today it's a rainy day. Let's hope the ash is washed down, and the forest fires under control!

Our roses are doing well this year, though we lost a few in the winter. Not as many as we feared though, and the ones that survived are gorgeous! 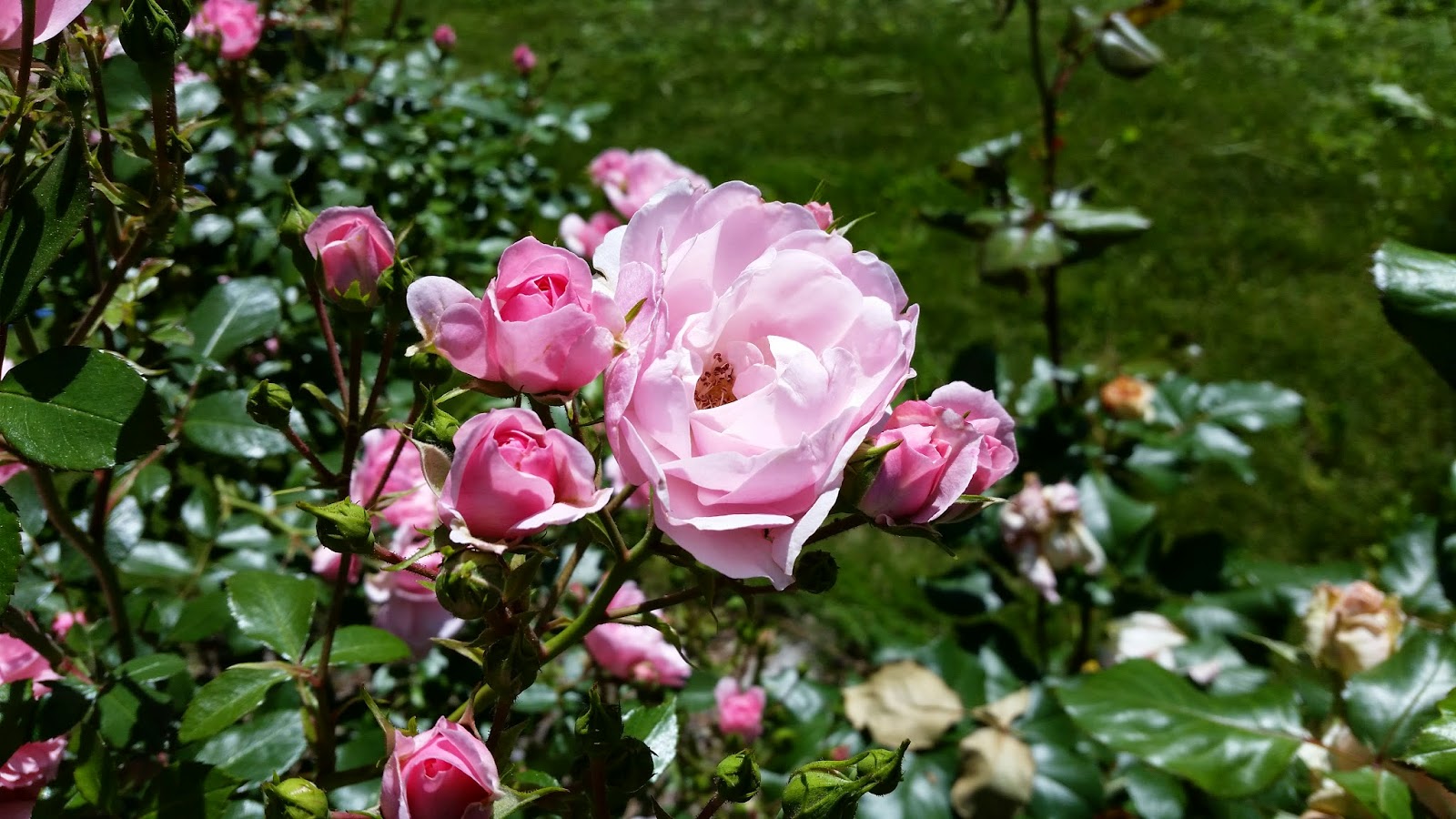 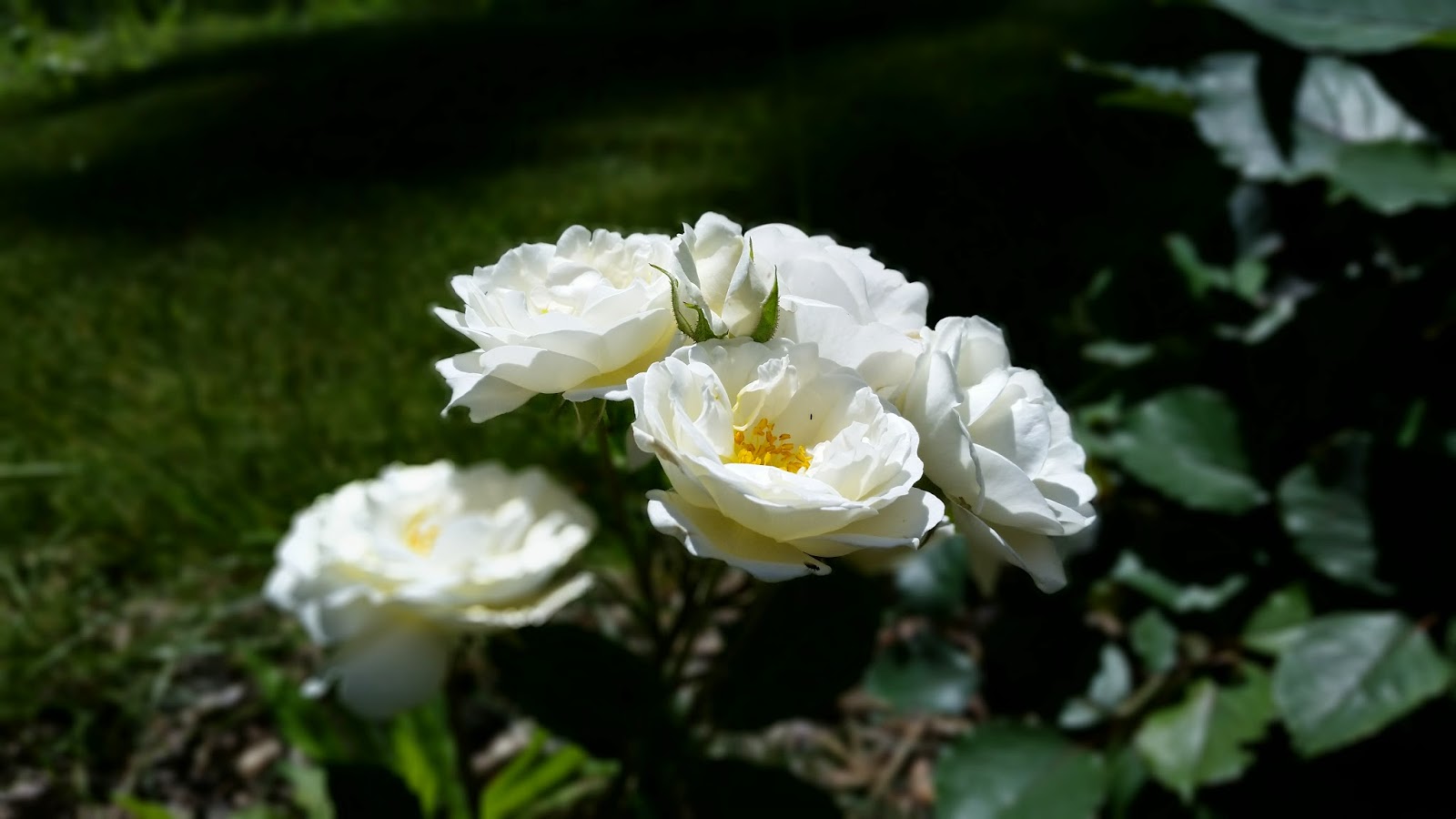 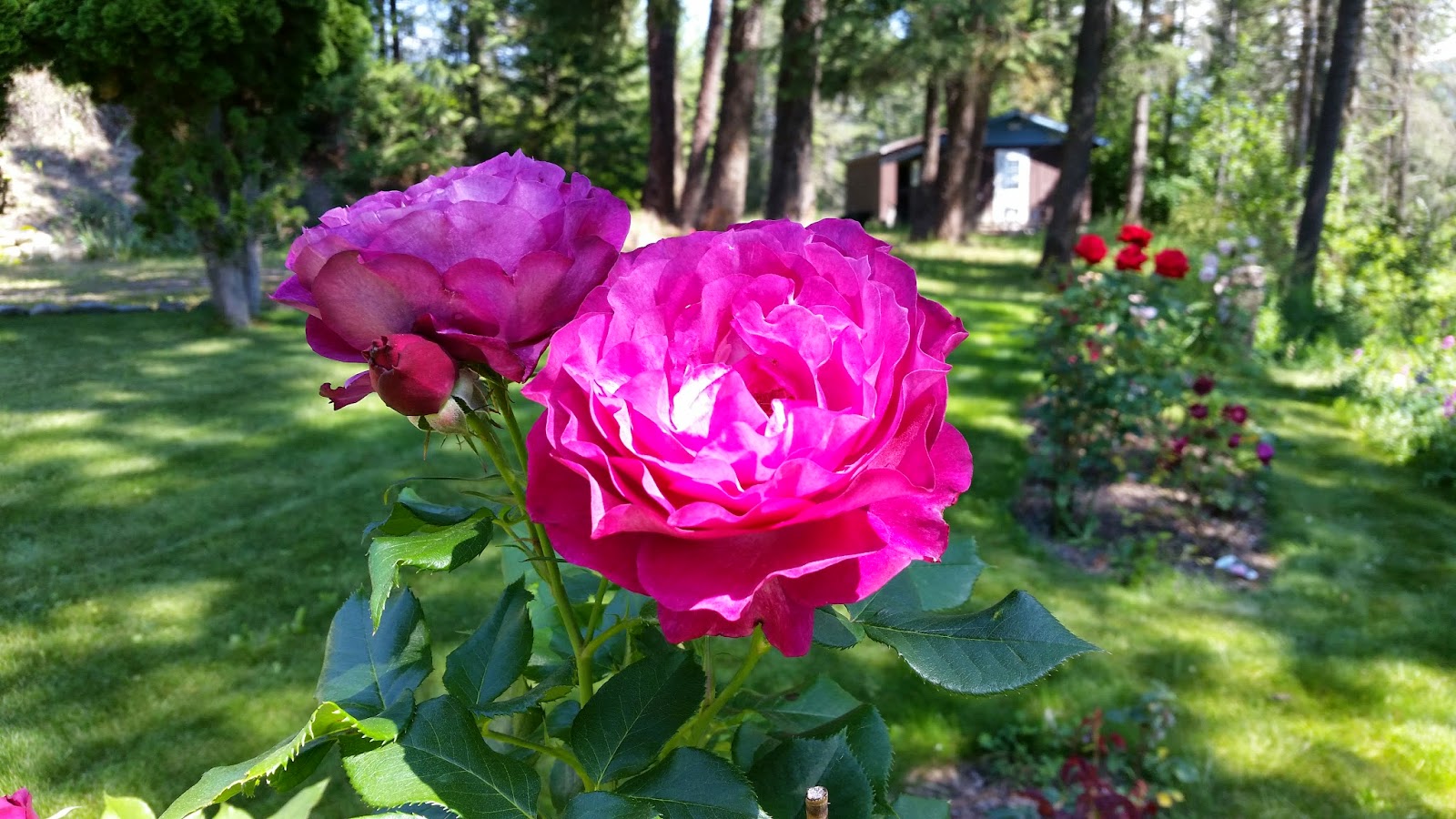 An older picture I hadn't posted yet... they bloom far too short and they are so pretty! 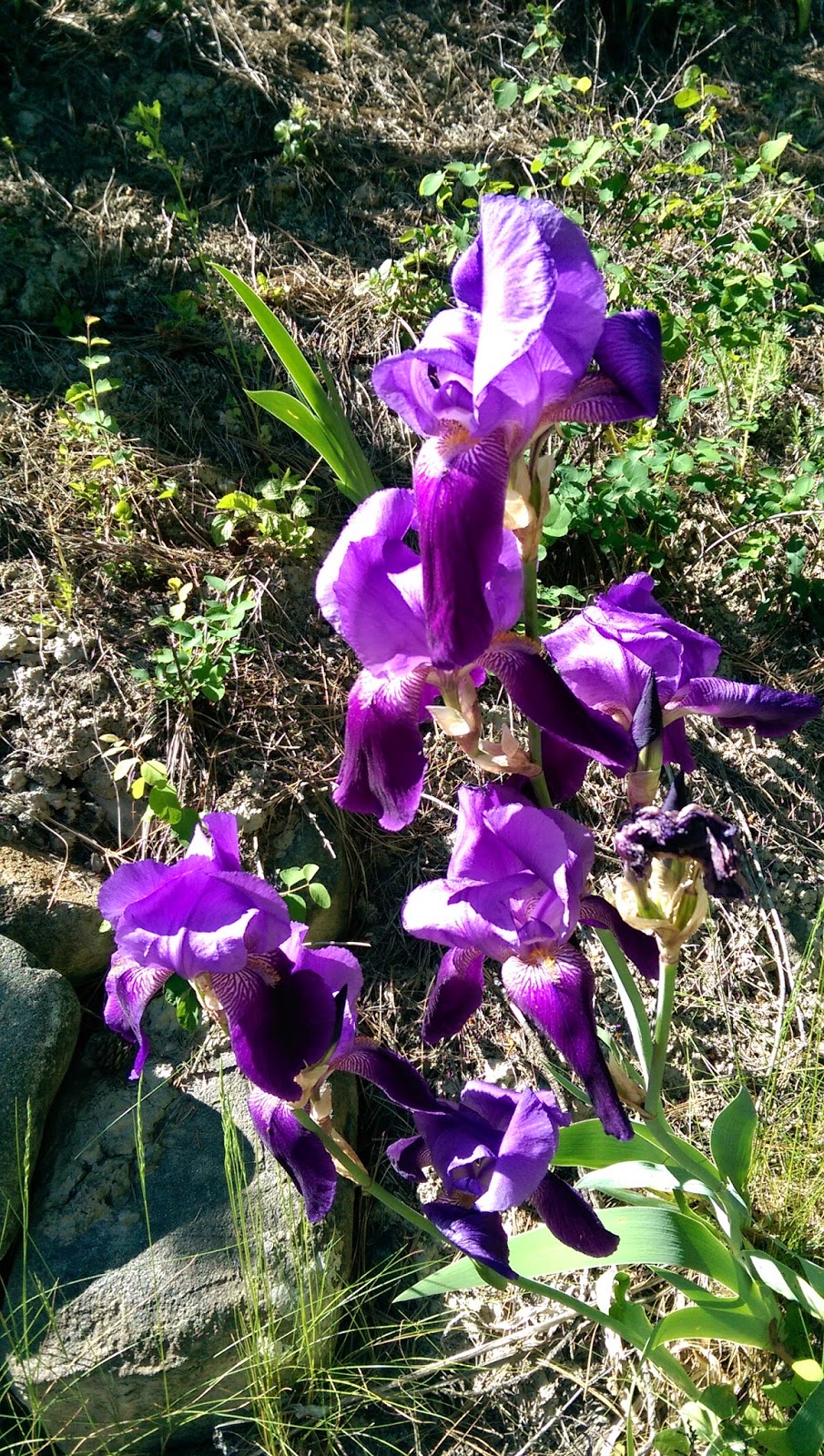 To the horror of a lot of Creston locals, we have been feeding our "outside pets" the raccoons ever since we moved here. They are so tame that they come running when Murray calls them, they know we feed them!

Before we went on our cruise, from her appearance we noticed that one of the raccoons was nursing. Murray, always a caring and sensitive soul, was so worried about her having enough to eat that he shoved an entire bag of food underneath the shed where they live, so she would be able to survive the week without us. 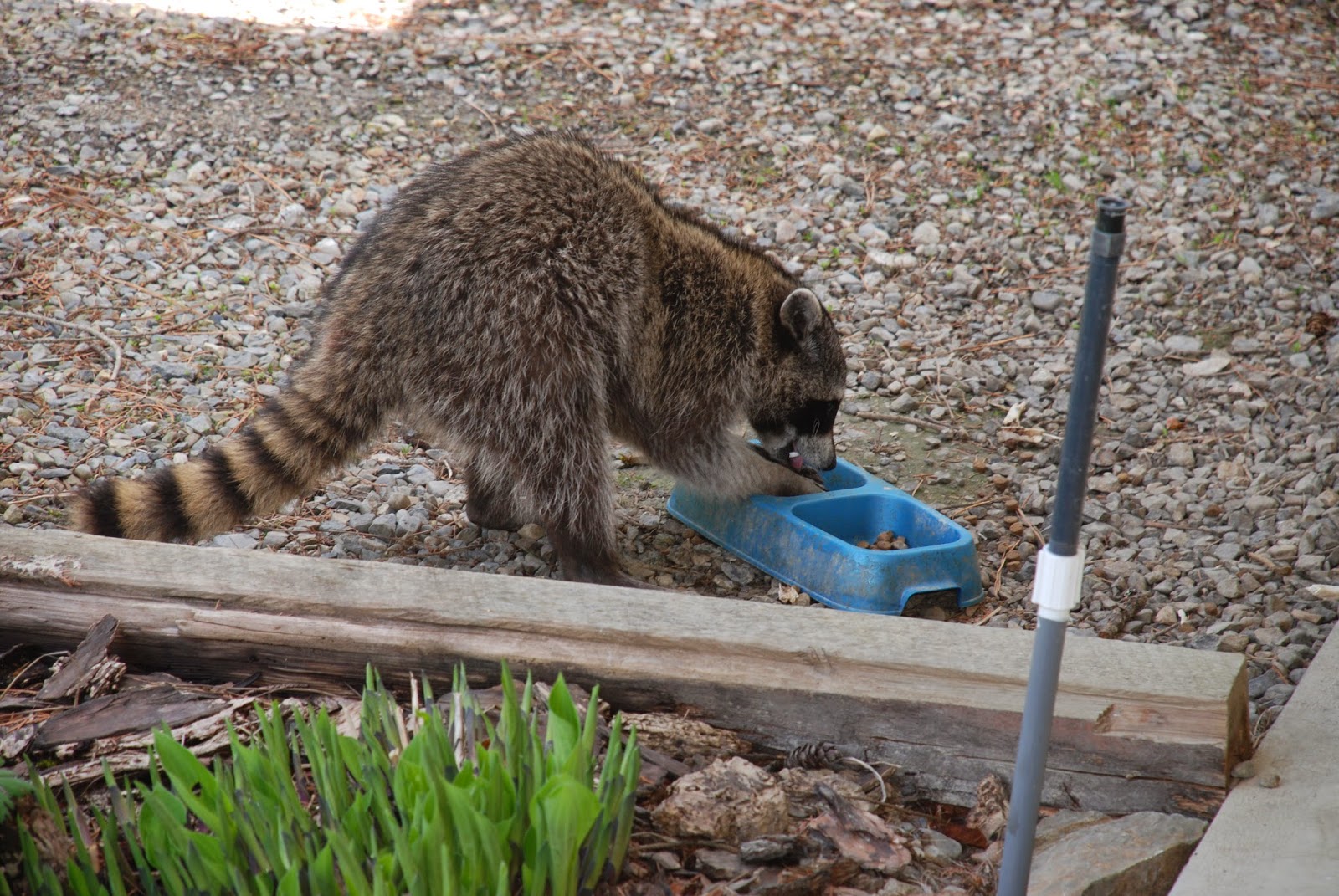 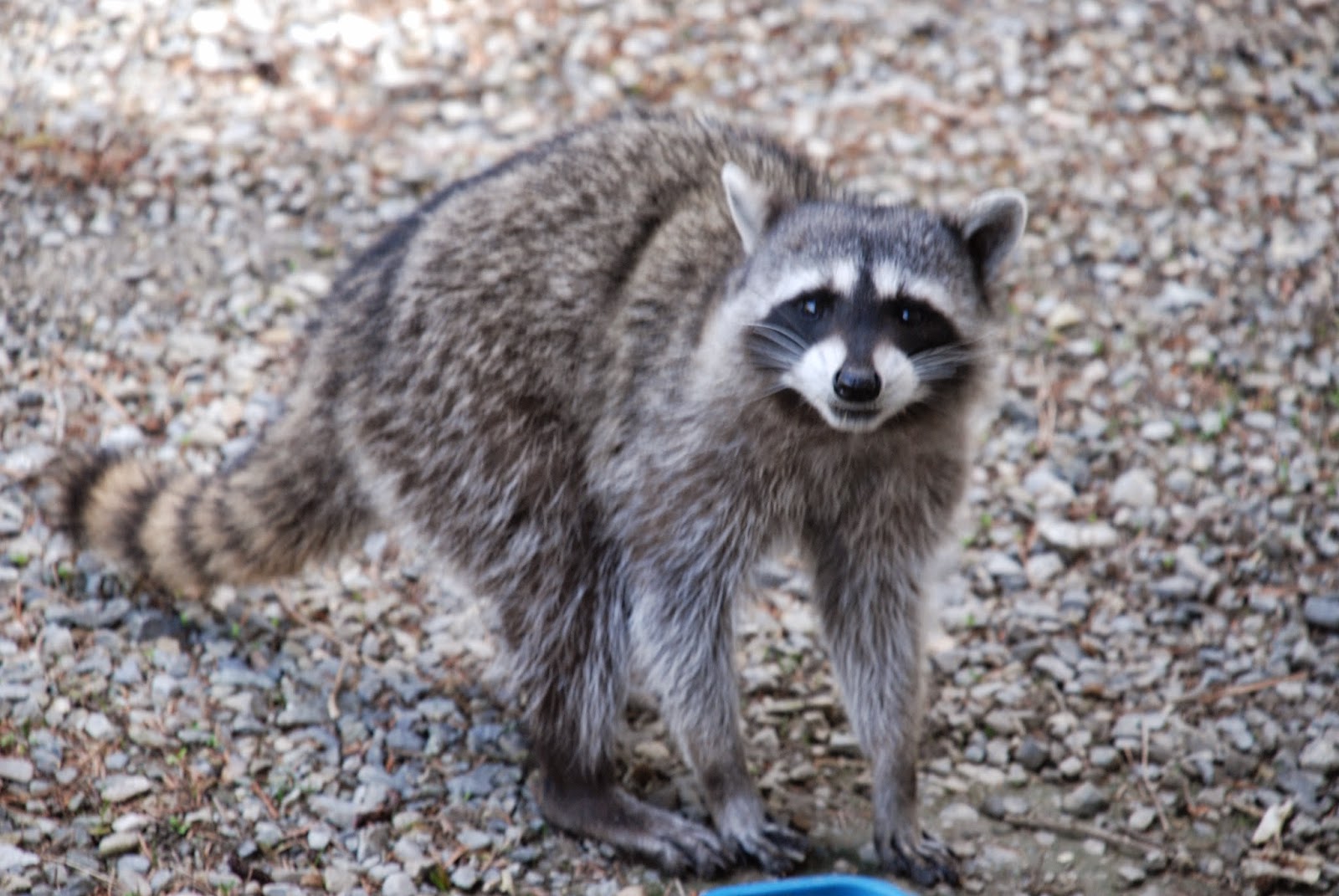 A little over a week ago, we finally saw our reward: "Frostie" appeared at her dinner plate with three bouncy little babies at her side! Ever since then I have been trying to stalk her with my photo camera, but she is a great mother and takes her babies to "safety" the second she sees me. So, I finally gave up trying and will post a security camera video instead.

Watch how cautious she is, making sure everything is safe before allowing her babies to come out - and she only takes them out late at night too. That explains the white video - not snowing but it was already dark and the camera was using night vision. What a caring mother, we almost feel like proud grandparents!

In other news, Murray has finally picked up his bagpipes again after many years of neglect. Here he is after a long and tiring five minute session with the practice chanter - with an equally exhausted Mickey on his knee. What a tough life they have! 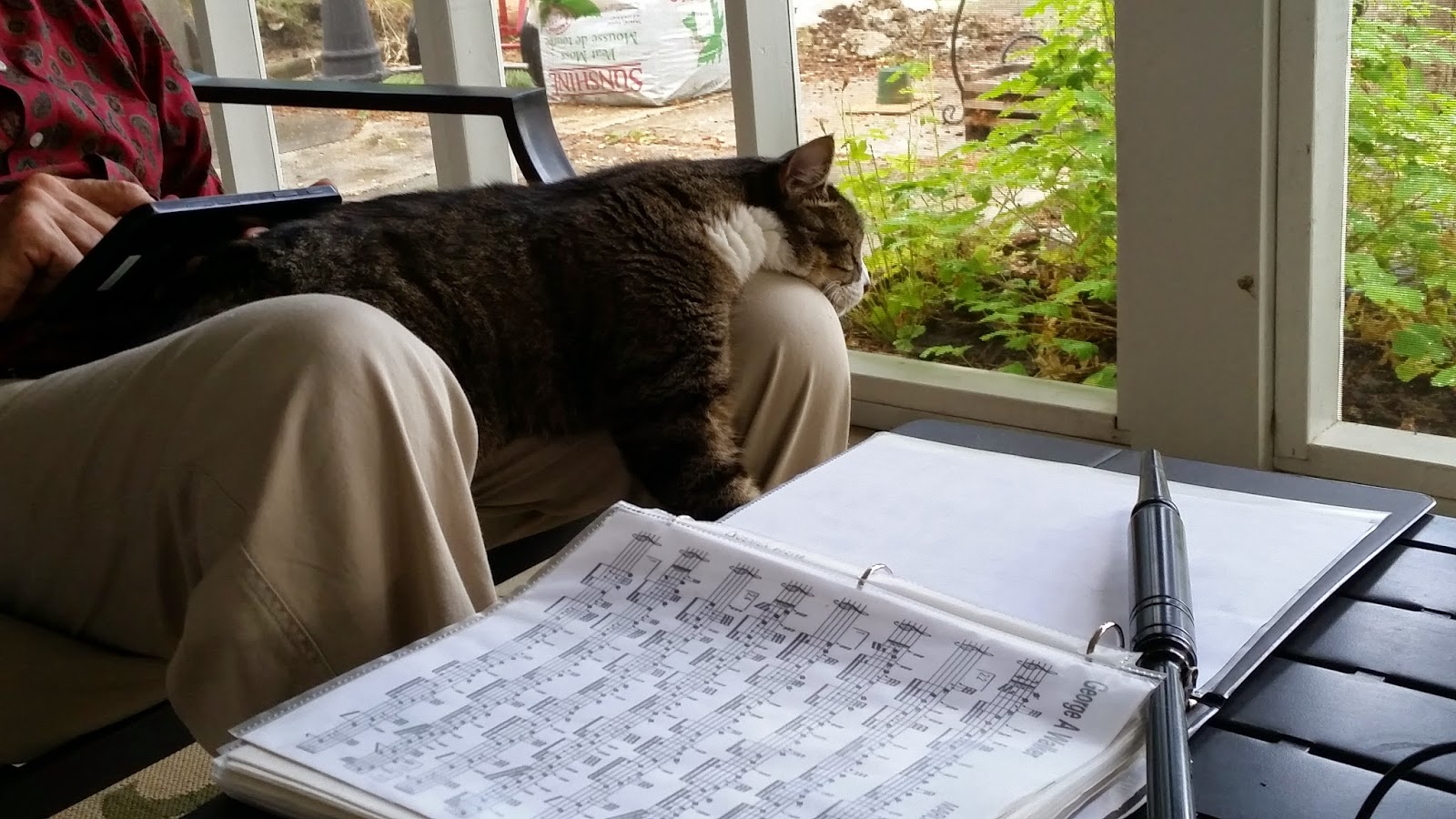 Waiting for the grand performance... 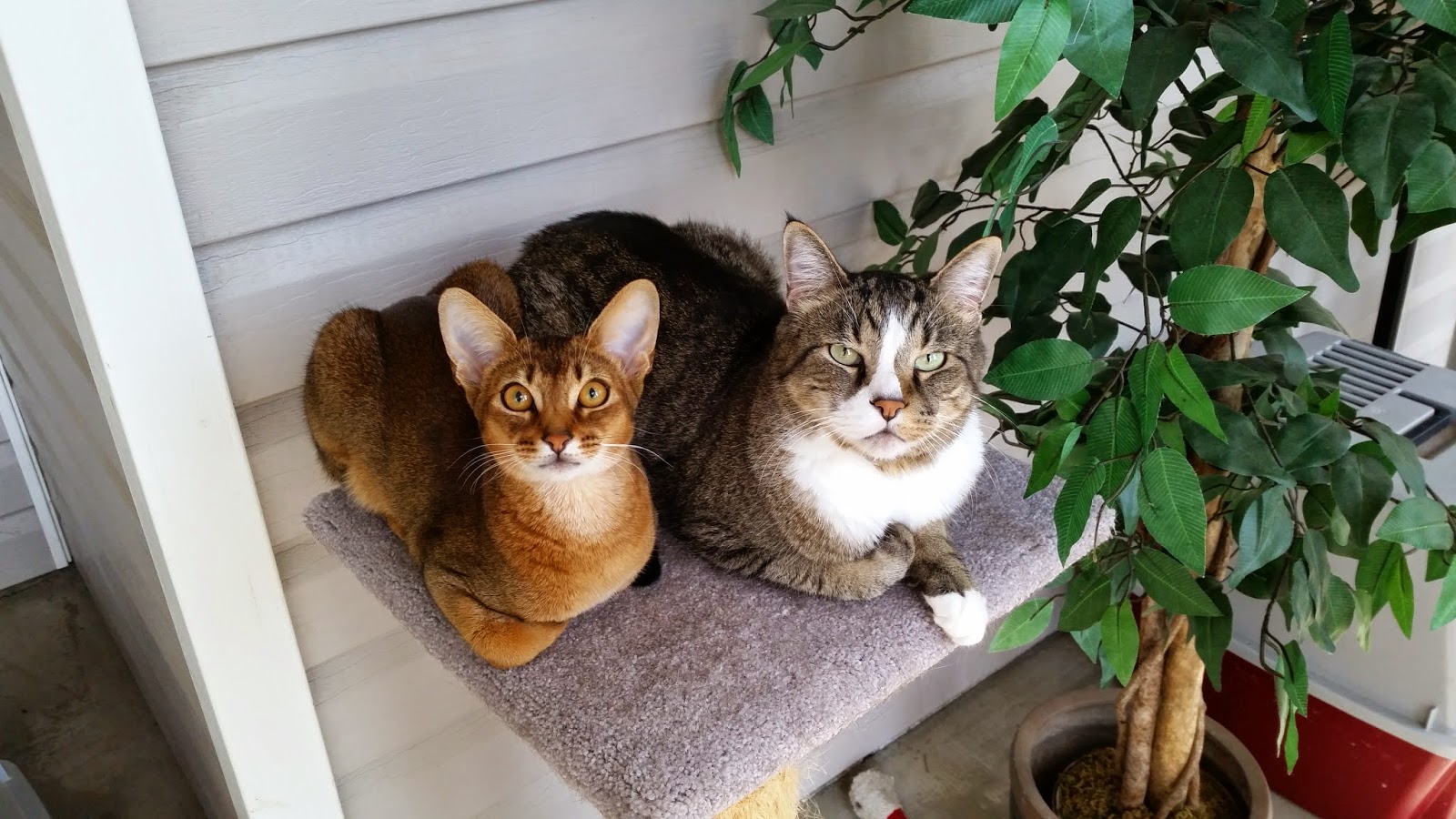 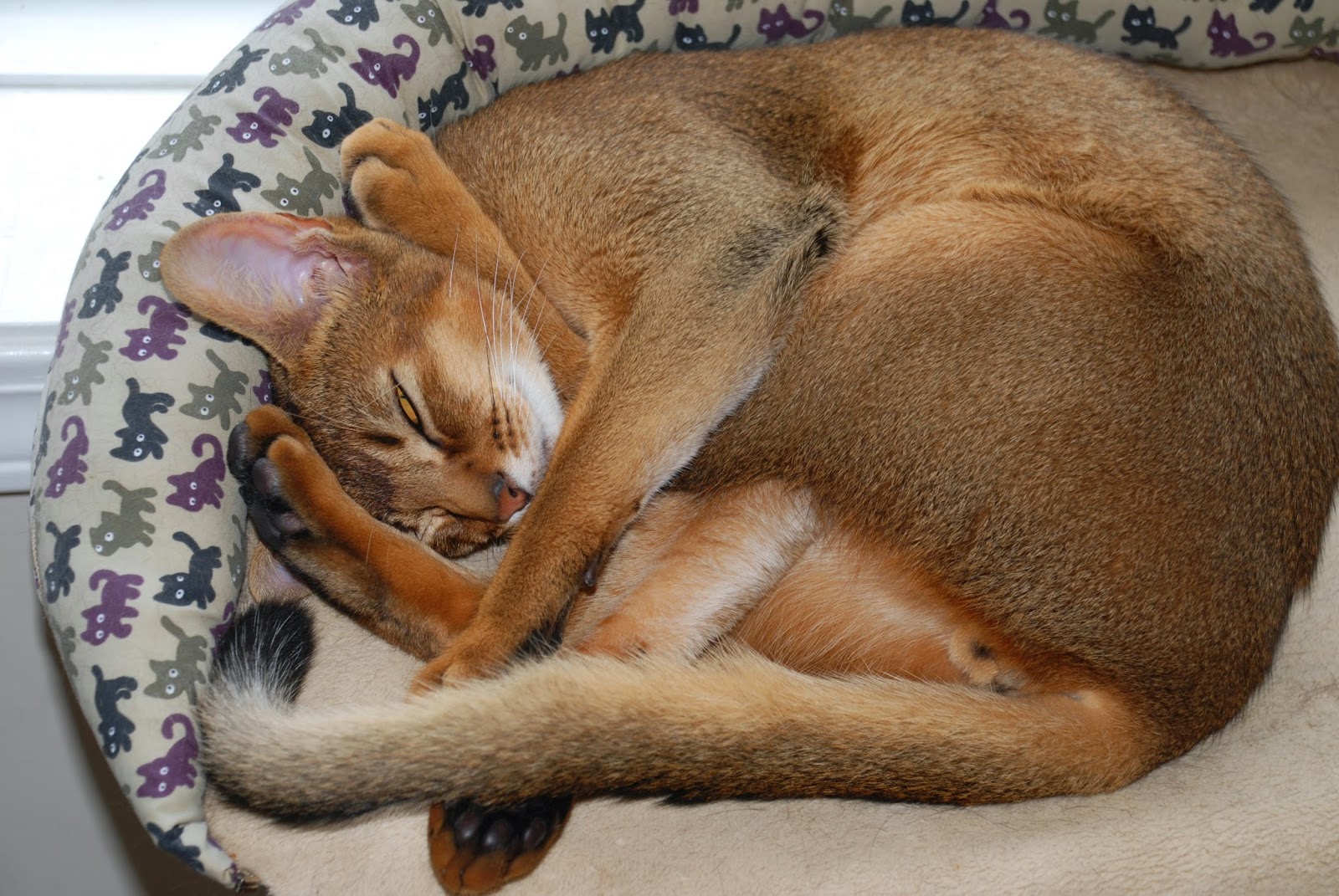