When we found our dream house in 2007, one of our prerequisites was that there had to be a facility for high speed Internet. We were assured that was the case... all was well. Or so we thought.


Little did we realize that "high speed" is a very broad definition. I was freshly imported from the Netherlands, where high speed means 25 to 50 mbps on average. To our dismay, after we moved in and signed up, we found that "high speed" in our case meant that we could only do slightly better than dial up: 2.5 mbps on a good day. That meant Skype or Hangouts calls were almost impossible, Youtube and Netflix suffered from the "buffer syndrome" and downloads or even sending pictures to others took simply.... forever.

A few years ago, we received a leaflet from Shaw (cable company) if we would be interested in their (much faster) cable Internet. Were we ever! We called the same day and of course they were happy to learn about a potential new customer. But after our initial call... nothing more happened. We called a second and even third time, again they were full of promises and good intentions, but... dead silence once more. Finally we saw a Shaw car parked in town, so we approached the man. He was flabbergasted that nobody had contacted us, since we seemed so eager to sign up. He took down our number and information and promised to pass that on to Shaw. You guessed it, we never heard back.

It so happens that a few months later, we saw another Shaw vehicle servicing the lines on our very road! This time we didn't take NO for an answer, we almost dragged him along to where we lived, begging him to hook us up! Having very little choice in the matter (and probably apprehensive about the wild look in our eyes), he came and visited us after he finished his chores. He took one look at our property and delivered this short, clear and simple message: forget it. Even though our very neighbors are Shaw customers and live not even half a kilometer from us, our place apparently is so remote, so dangerously inaccessible and so not worth the trouble, that Shaw would never consider hooking us up. All right, now we knew and we quickly put the idea out of our heads forever. Can't get upset over something you can't have!

Fast forward a few years, to the summer of 2014. To our immense delight, we learned that Telus (our phone and DSL service provider) has chosen Creston to be the first town in the Kootenays that would be provided with fibre optics. With nervous twitches and anxious swallowing, I checked the map........YES! Joy of joys, our house was included in the colorful section that said 'Coming in October'! Murray and I grabbed each other by the shoulders and danced a few times around the kitchen table, the happy shrieks probably chased a whole family of bears away! 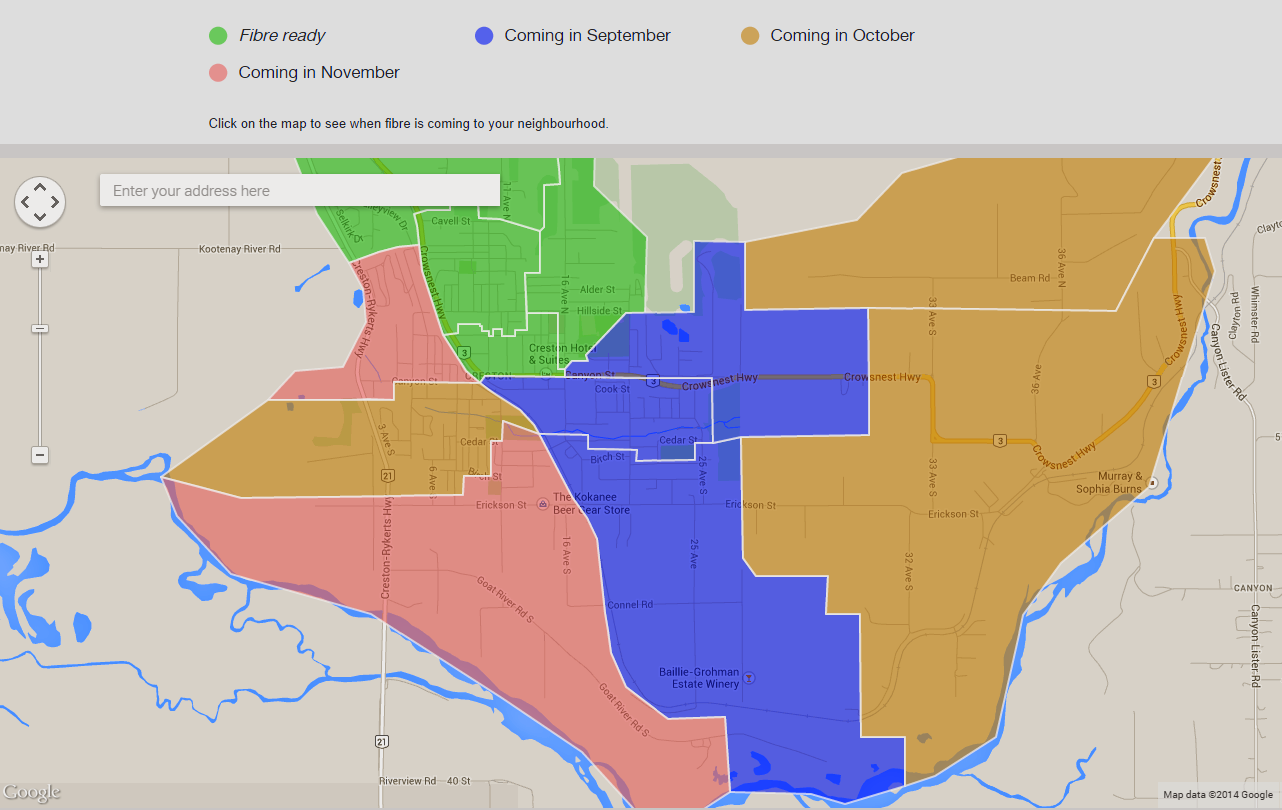 Once you know something good is coming, time tends to grind down to a near standstill. August came and went, September... the colorful map was turning greener and greener until one day in October, one of the last ochre patches had finally turned green - OUR area!

But, why had we not been visited yet? For three days I kept my nose glued to the window, and when the Telus car finally arrived on our drive, we nearly dragged the two pleasant young men inside the house. Were we interested in Optik? YOU BET! So, an hour later, all papers signed and contracts renewed, we danced another happy little dance. We were scheduled to be connected on Tuesday the 28th of October.

The technician arrived that afternoon. When he came to the door, his eyes were grave, his face radiated gloom and he was shaking his head mournfully. He did not have good tidings at all... our drive is 400 meters long and the current copper wire is buried underneath that, somewhere. However, that was a method they no longer use, now they'd have to get a specialized digging company in, that would have to dig a 50cm deep trench all alongside our drive, fill it with gravel, insert a conduit, then fill it with more gravel, add a yellow marking tape, and smooth it all out again. Estimated time: several days with a full crew. Cost: no less than $10,000.

"But what about our electricity poles?" we asked. "No," was the curt answer, "communication cables and electricity cables cannot share a space." We swallowed. "Can it be done through the neighbor's property, since there are cables from there that run to our place already?" "Impossible," came back the reply with a wagging finger, "what if they move house and the new neighbors complain about it and want it taken down?" Our mood dropped to ocean depths. "Is there nothing that can be done?" He mellowed a little. "Well hopefully they will still consider digging that trench." The overall message was clear though: don't keep your hopes up too high!

He went to great lengths to explain that Telus is seriously minding their budget and that they did not have the money to pay him any longer than until that coming Monday and he'd be gone from the job. He left us with the strong impression we'd be even worse off with the contractors that were left to do the remaining work.

Usually we are not the types to be overly upset over disappointments. It wasn't the fact that we would be denied higher Internet speeds. We lived with that for 7 years and didn't suffer. No, it was the feeling of the utter rejection. Just because we have a longer drive than usual, were we really going to be discriminated like that by every single company? They can't just skip one house in an entire town, can they? Combined with the absolute certainly that if we were refused now, we'd be stuck with those slow speeds forever, we were devastated. That day, this sums up just about exactly how we felt: 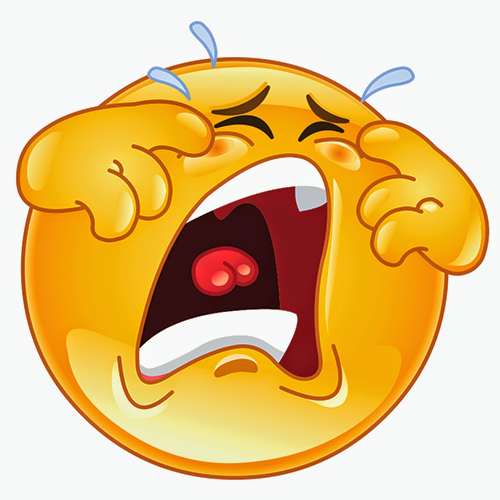 Our woes weren't over though. That evening, we were listening to a broadcast over the Internet. Suddenly, all fell silent... no Internet. Now with all these mountains surrounding us, this is not an uncommon occurrence, so I joked to Mur "I bet Telus cut us off thinking Optik's all done!" He laughed a painful laugh (not all my jokes are funny) and we waited for the connection to come back, usually within 5 to 10 minutes. Nothing happened. Internet was gone and stayed gone.

The following morning, before it was even 7am, I woke up with a vicious mood. I jumped out of bed and called Telus even before my first cup of coffee, carrying a frown that reached the tip of my nose and with clenched fists. When asked why we didn't have an Internet connection, the first thing the poor Rep said in all innocence: "Ah but I see you changed to Optik, that is why we disabled the old connection!" I will not quote the entire one hour conversation that followed, this blog post is already way too long. Let's summarize it by saying that the Rep reconnected our old copper cable remotely, assured us several times that nobody has ever been denied fibre after a residence shows up in the file as being eligible, and that we were listed as customers that should be able to get it, albeit delayed for probably a few months.

We felt better already! Great was our surprise when two days later, on Friday, our cats were suddenly very excited with unusual activity outside our window. What was going on??? Was that really what we were hoping it would be? 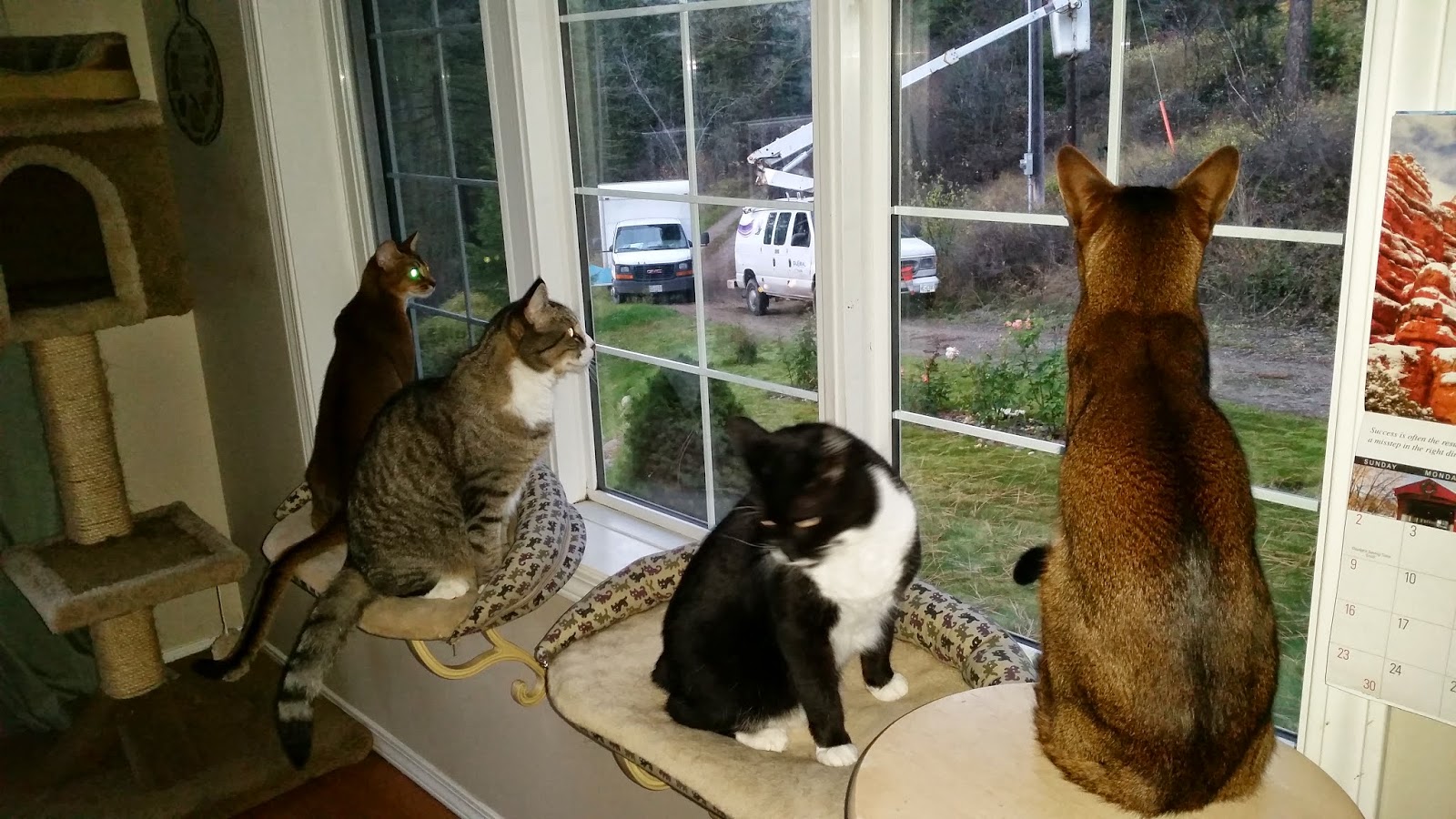 YES! Not only are we really getting fibre optics, but there wasn't any digging involved at all. Three delightful gentlemen had assessed the situation and decided it wasn't going to be a hassle at all. As we had suggested in the first place, they used our electricity poles and hooked us up across the road and our (very nice and cooperative) neighbors... a simple, smooth operation. It was all done and finished within only a few hours. The men were full of fun and jokes, they were really enjoying their job and wanted nothing but the best for us! We appreciated them so much that we stuck little note in each of their pockets - the type of note you can use to buy beer with! 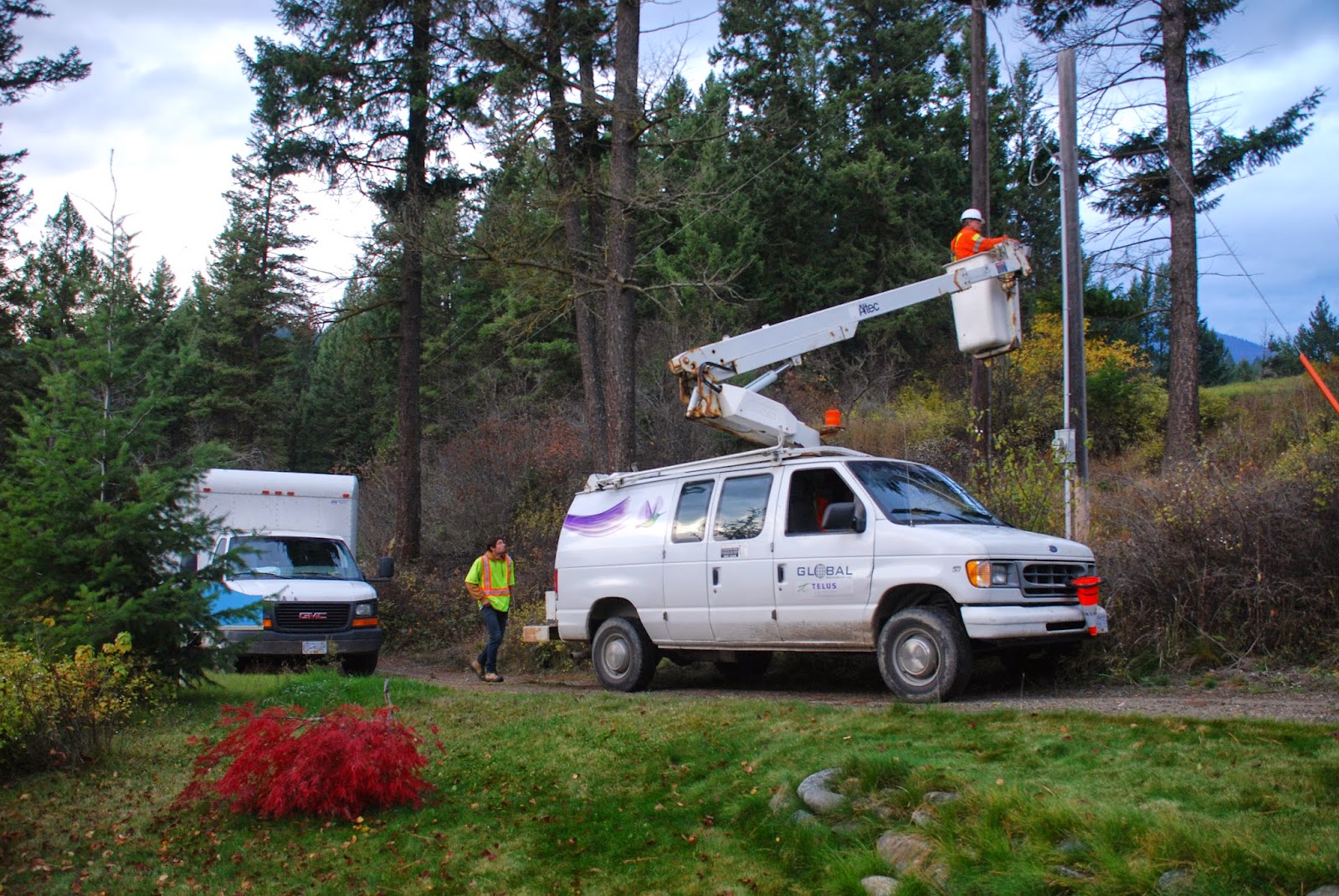 After that was done, we just had to wait another week for the "diggers" to come in and dig from the pole to our house. What a job that was! First they dug up the grass by hand, and then a huge machine cut a deep trench bit by bit. 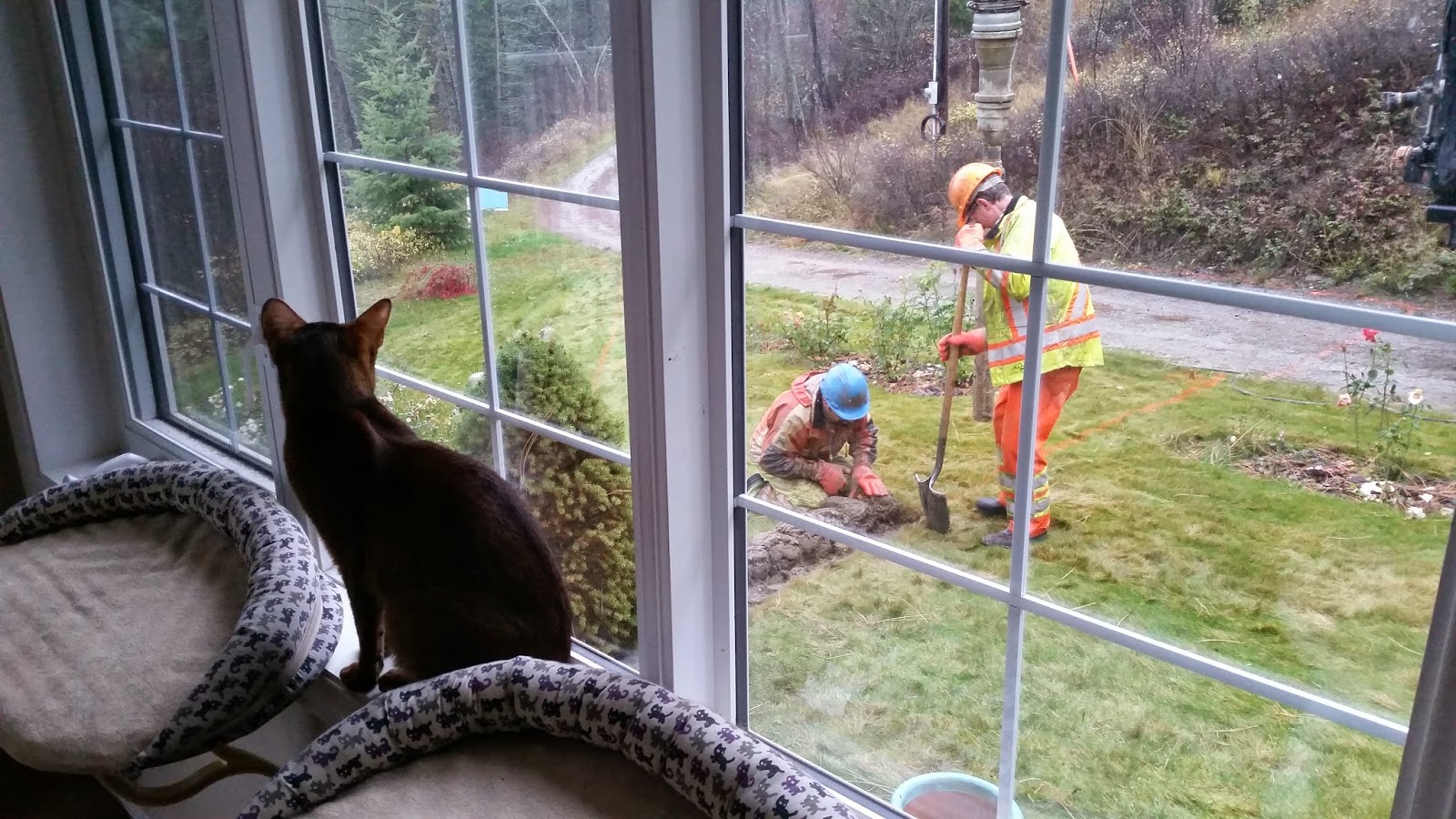 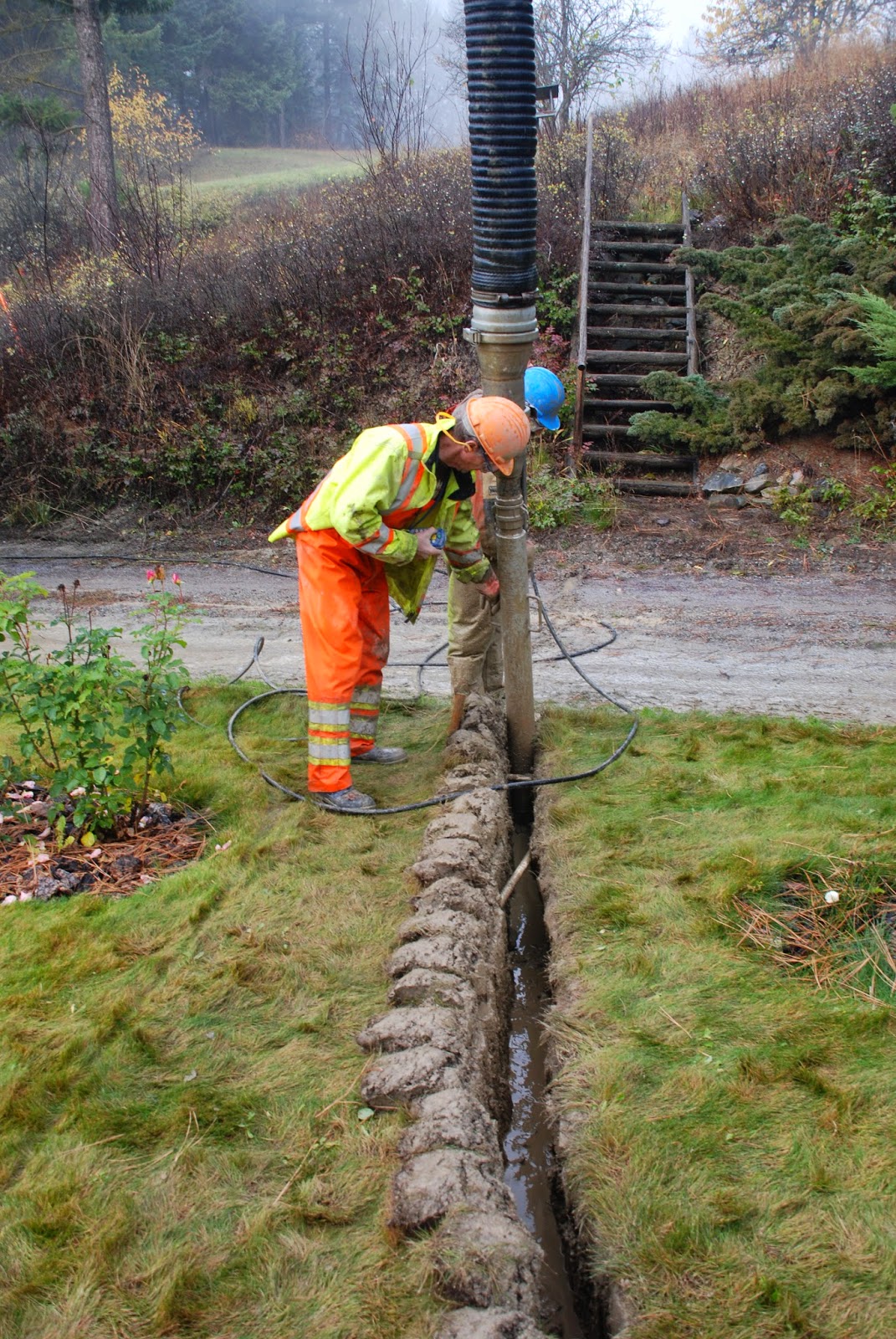 Across the lawn, then from the pole to the road and finally across the drive. It took them hours! 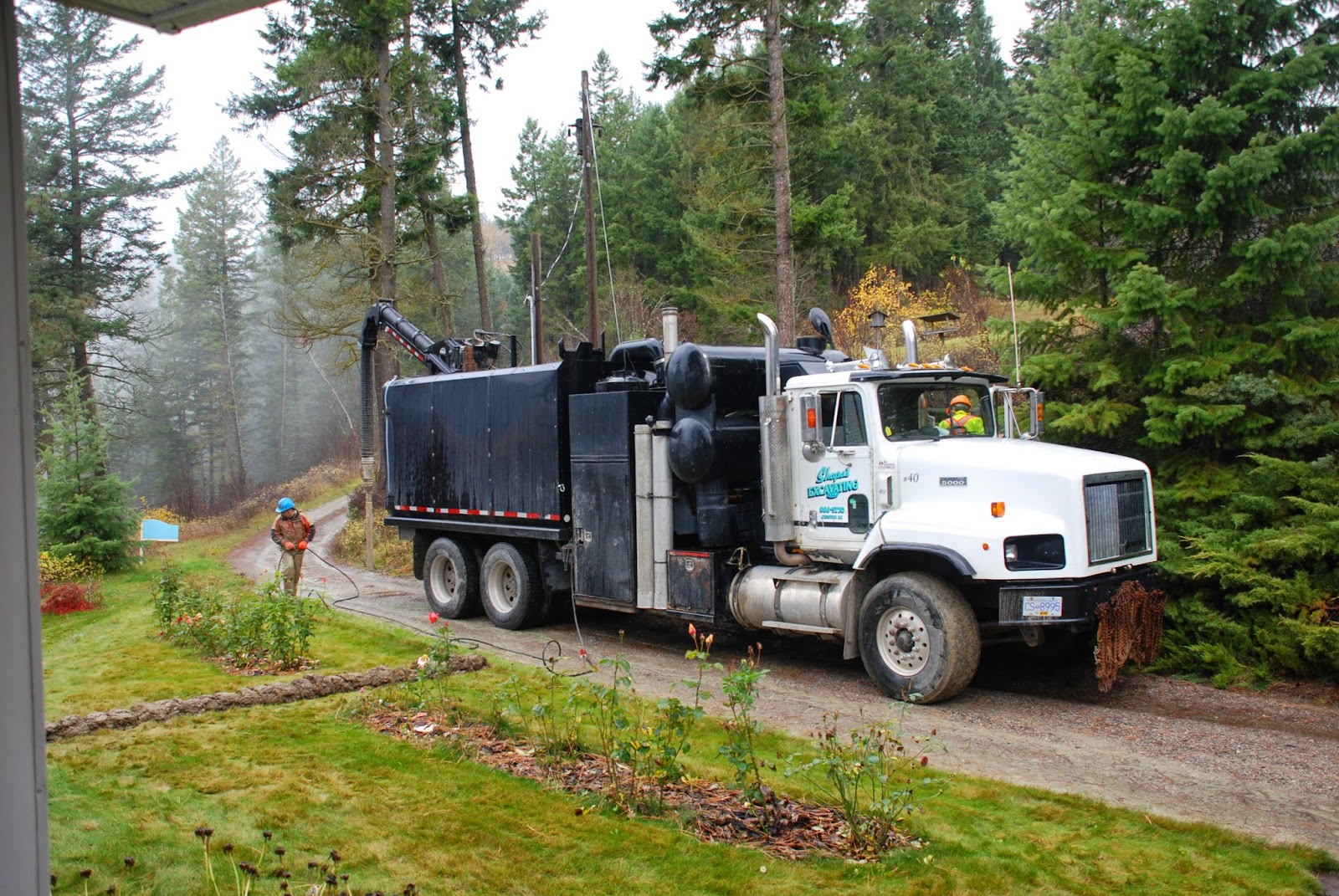 After that we still had to wait a few weeks for them to connect us to the server, which was the final bump that was finally overcome yesterday.

So, all is well that ends well - or should I say begins well. As of now, this is the speed we are enjoying:

Mission accomplished, thank you Telus! Just in time too, because this is what we woke up to this morning! 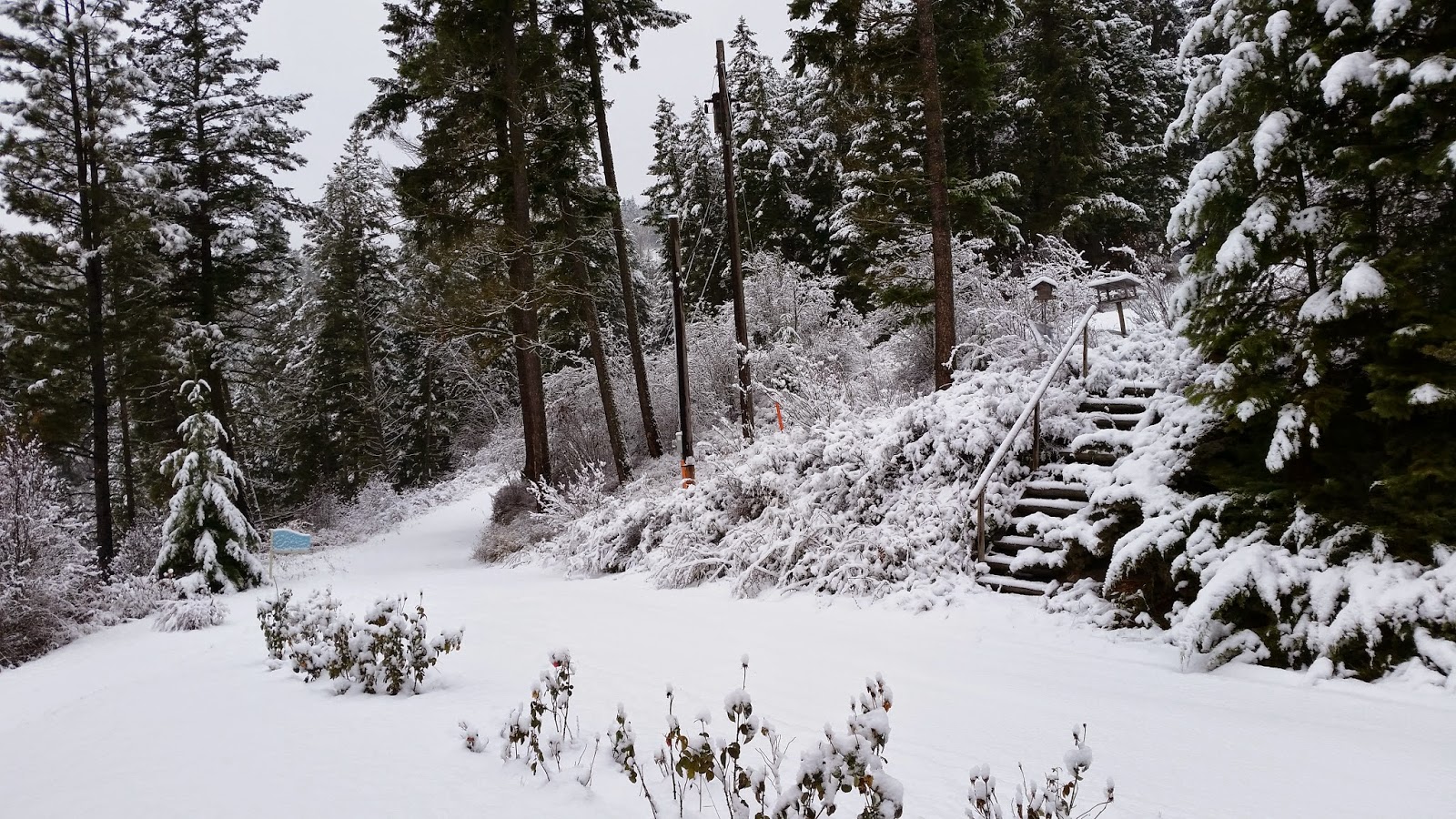 Hope you all enjoy your fibre optics as much as we do, fellow Crestonites! 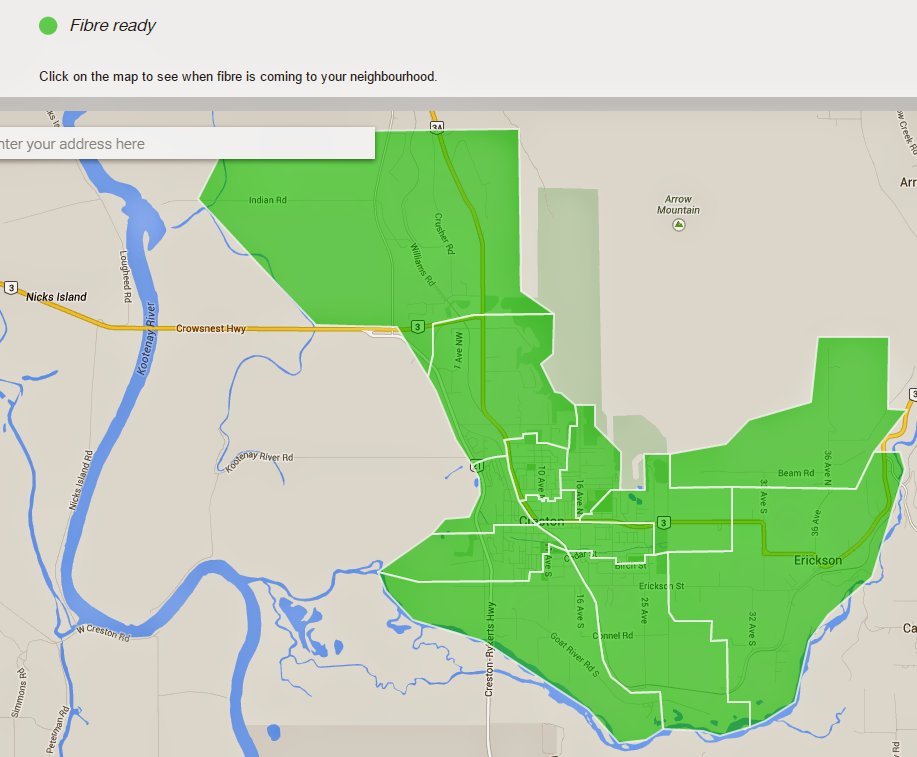