Bergen today! This time we were fully prepared for rain, because in Bergen it rains 200 days a year. As the Captain put it, it's called the Rain Capital of Europe.


Much to our surprise, we woke up to a cloudless sky! This made the sailing into Bergen a spectacular event and we stayed glued to the window until the ship was docked. 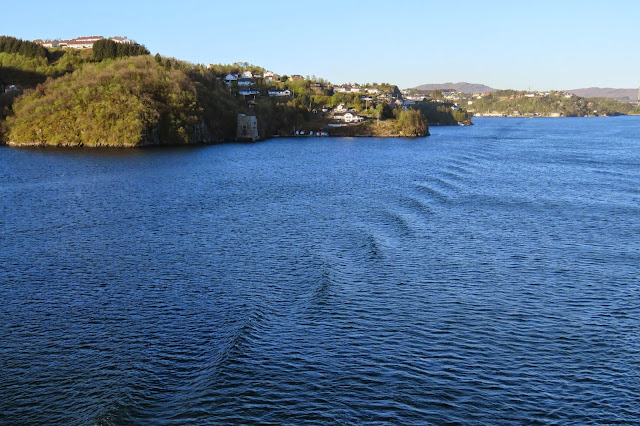 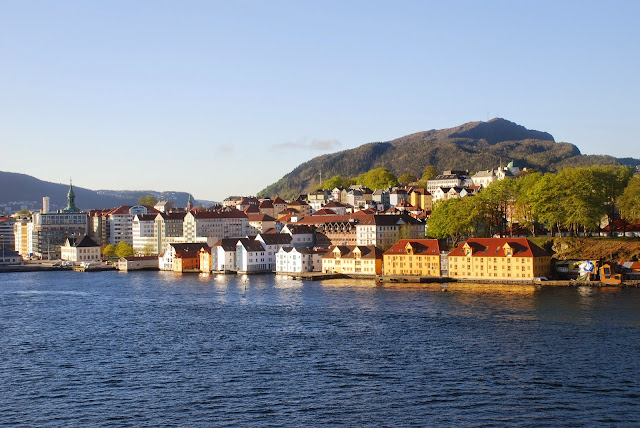 Mom and Dad decided to stay on the ship, because Bergen is a busy town and that day happened to be a public holiday in Norway. 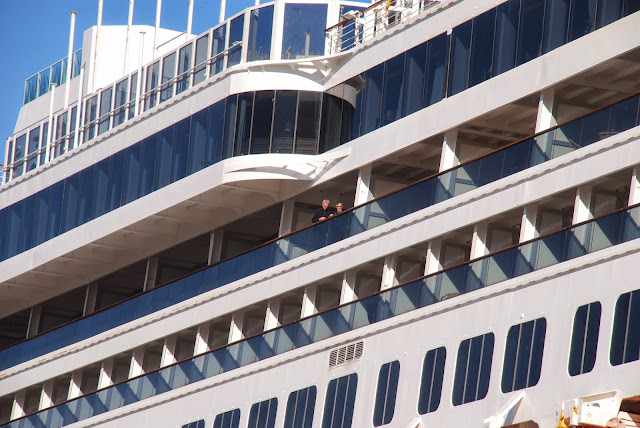 Waving at us from their balcony. 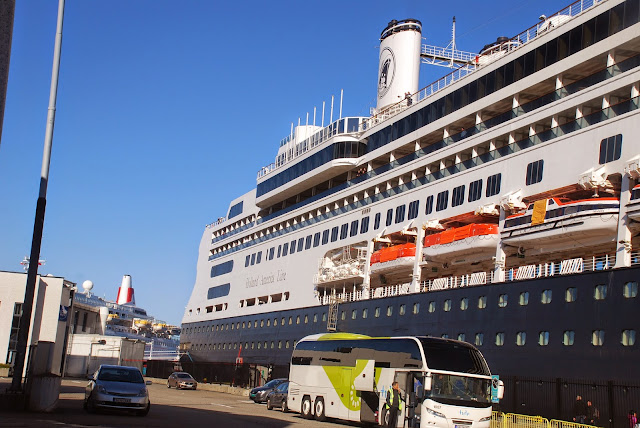 Mom was happy to enjoy the sunshine and the view. 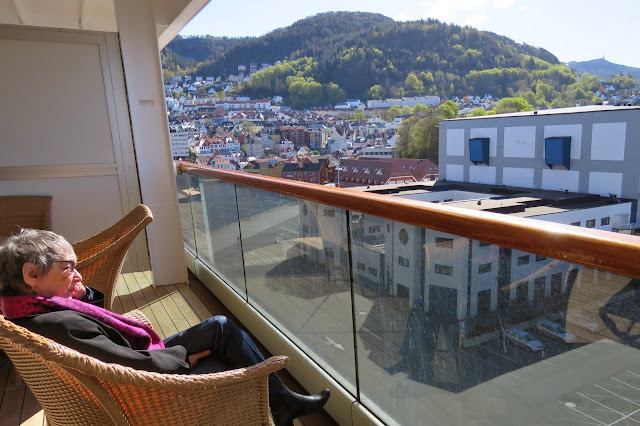 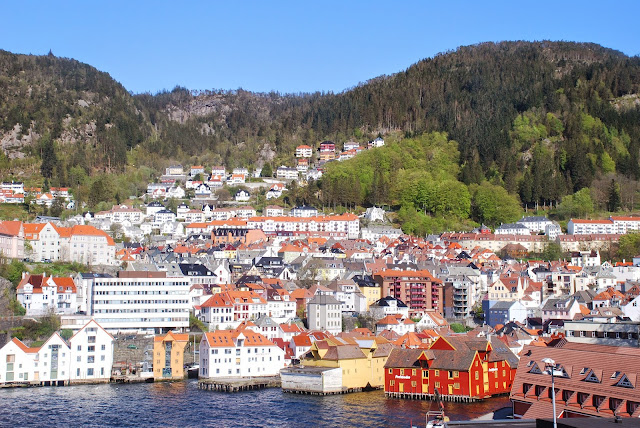 Little did any of us know at that time that Murray and I were spontaneously going on an adventure that involved going up to this tower... but let's not get ahead of the story. 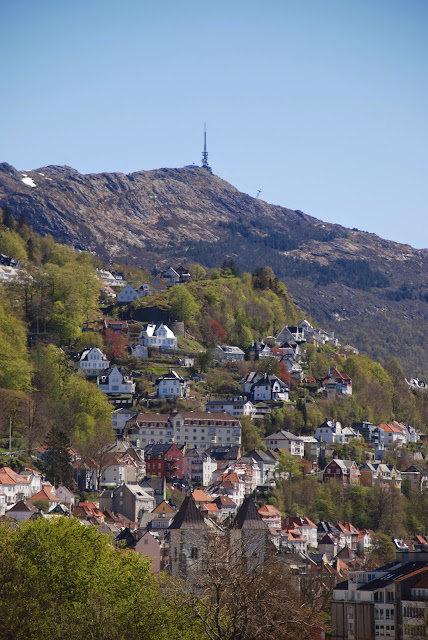 Meanwhile, Murray and I went for a walk and took pictures of the town. 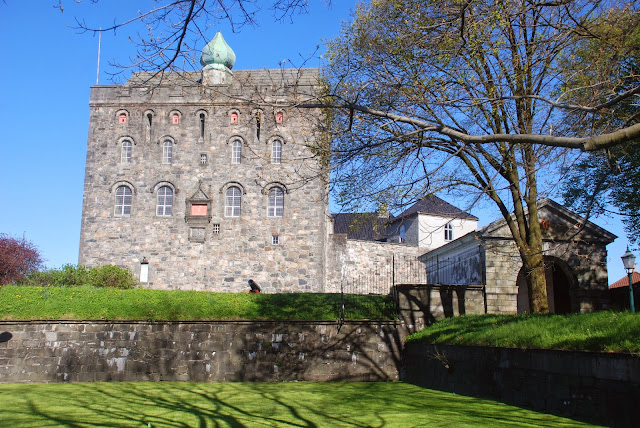 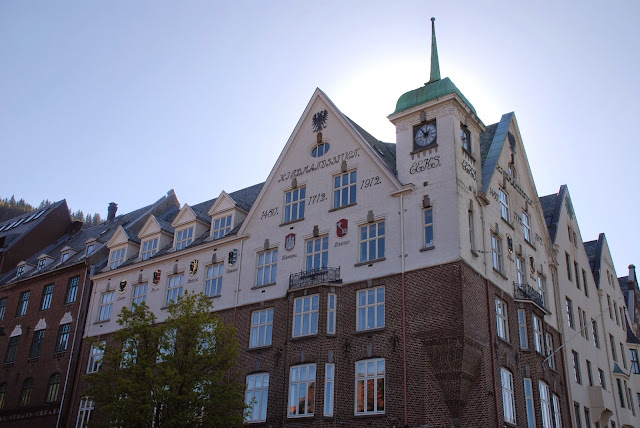 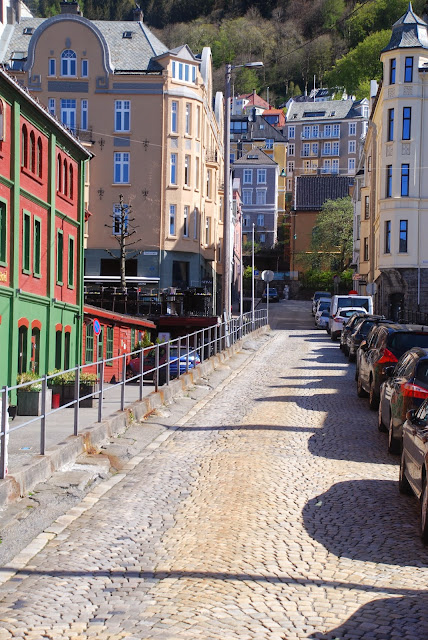 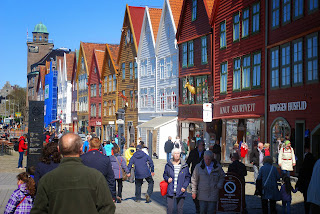 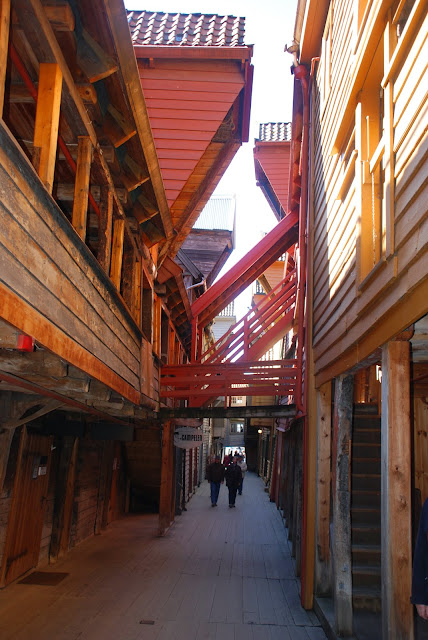 Naturally we did a bit of shopping in Bergen... 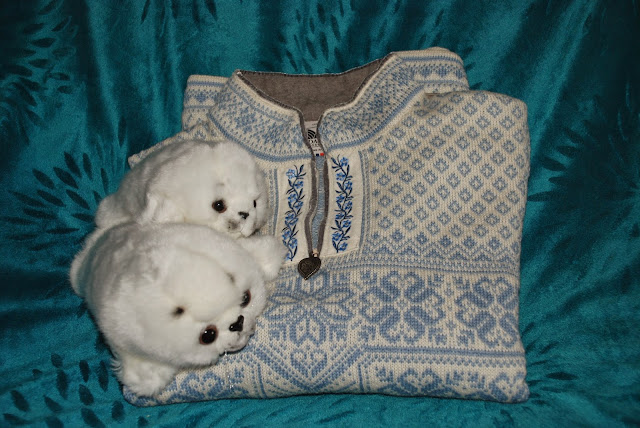 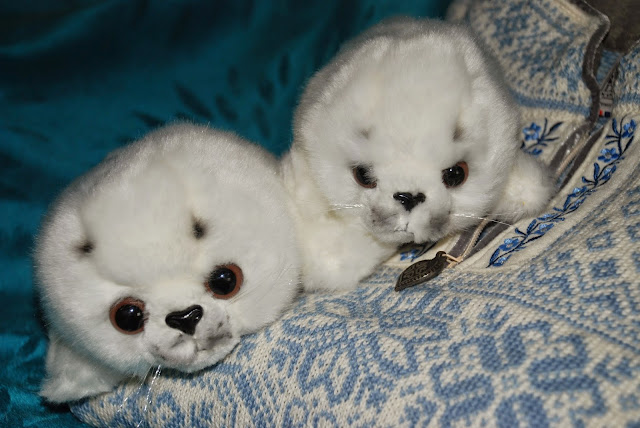 At one point, a gentleman handed us a leaflet with the text "You haven't really been in Bergen until you have been up Mount Ulriken." It promised the most amazing view and we were sold on the spot - we just had to go! A bus took us to the base of the cable and then we were taken on a 6 minute ride up the mountain. We watched Bergen grow smaller and smaller by the minute... 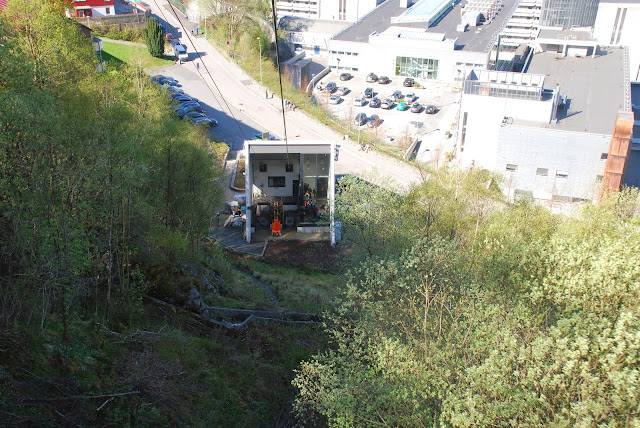 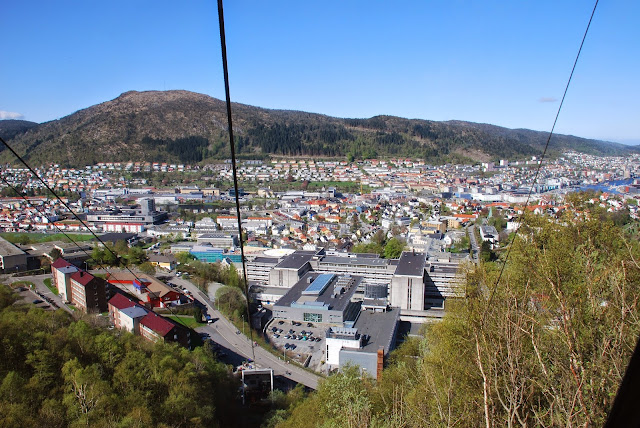 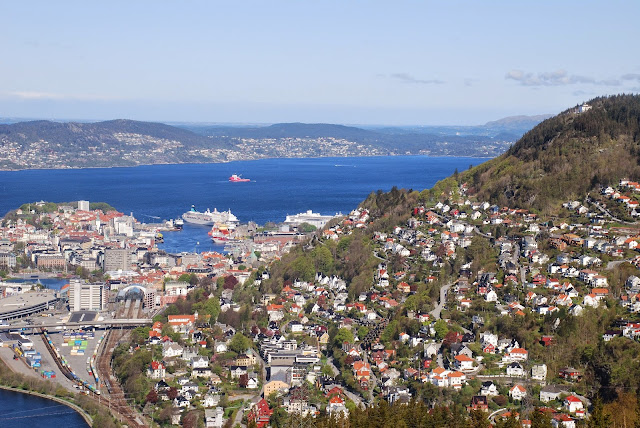 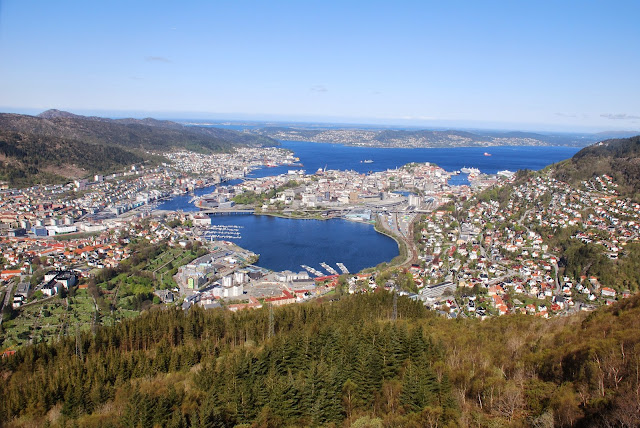 Up top we felt like we could see as far as the end of the world! 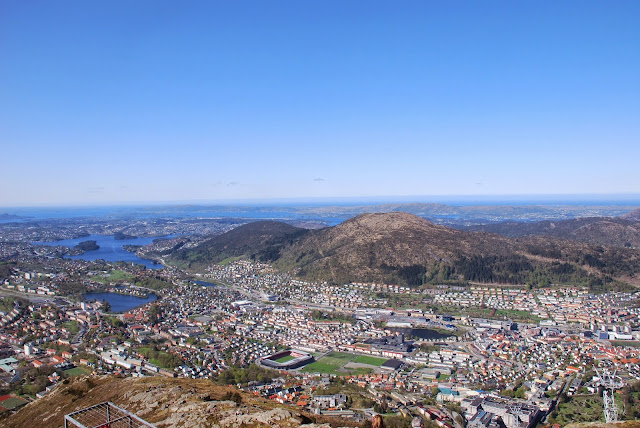 It was true, we had never seen a view like it and we live in the Rocky Mountains! If we thought the ship was small when we were up the Geiranger top, it was nothing compared to this view. From that distance, it was not much larger than a pinhead. 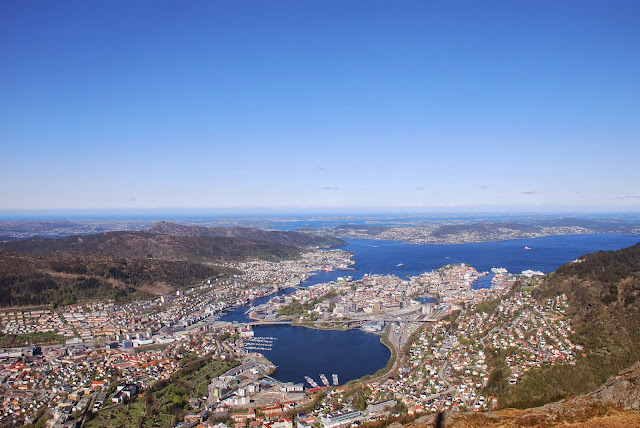 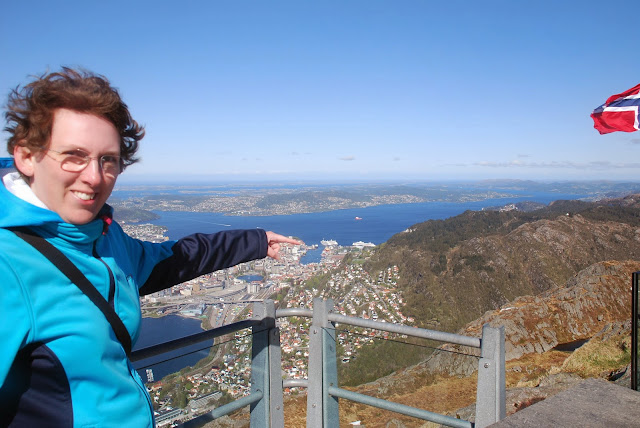 It was cold and very windy up top and we were not really dressed for that, so after about ten minutes we went back down the cable and back to the ship. 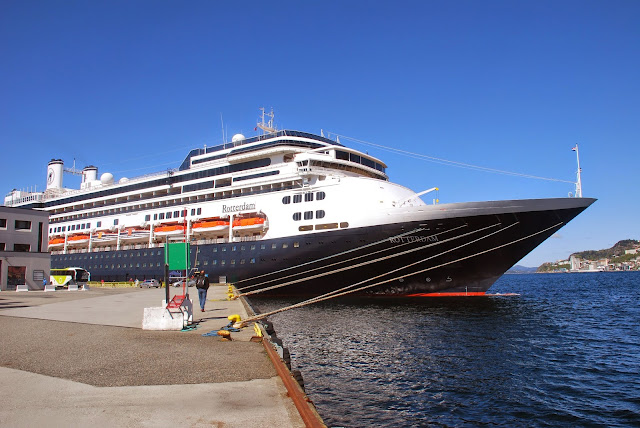 We told my parents all about our adventures to the top of the world. They could not help but be a little jealous - but truly I don't think they would have enjoyed the experience that much, it was COLD! Whereas on the ship, it was warm enough to strip down to just a t-shirt. 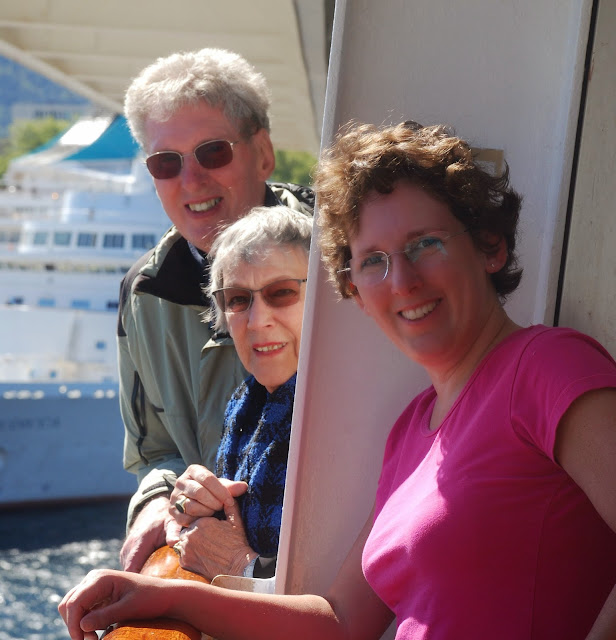 Then we all had lunch together so I could show off my new Norwegian sweater to Kristine and Yudy. 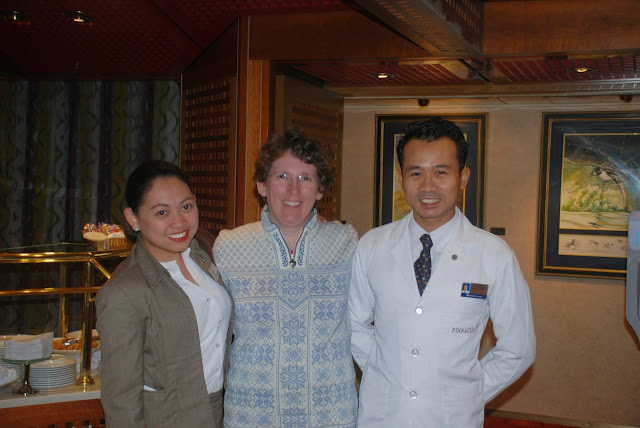 Later that afternoon, the Captain announced that we would have a few hours of scenic cruising before we would get back to the open sea. My Dad was so disappointed that we had to go for dinner at 17:45... Because it was still cloudless and the sun lit up the fjords like we had never seen before. We waved goodbye to Bergen and then went for supper. 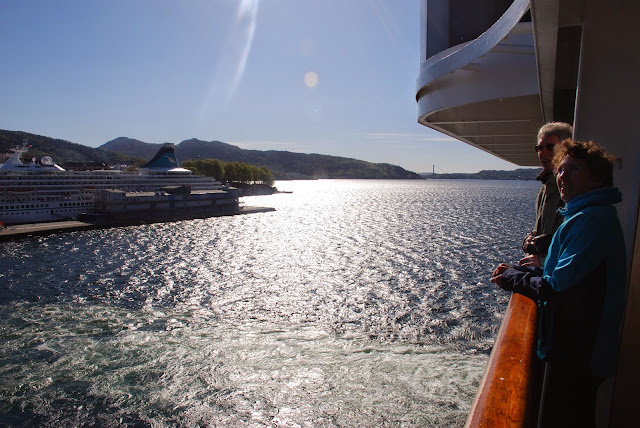 Dad gobbled up his dinner and went back to the room, he still managed to get a few last shots of Norway before we reached open sea. It was all we were going to see from now on, because we were already on our way back to the Netherlands... 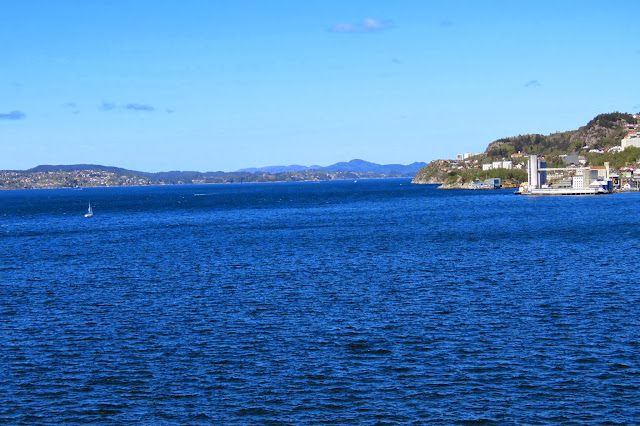 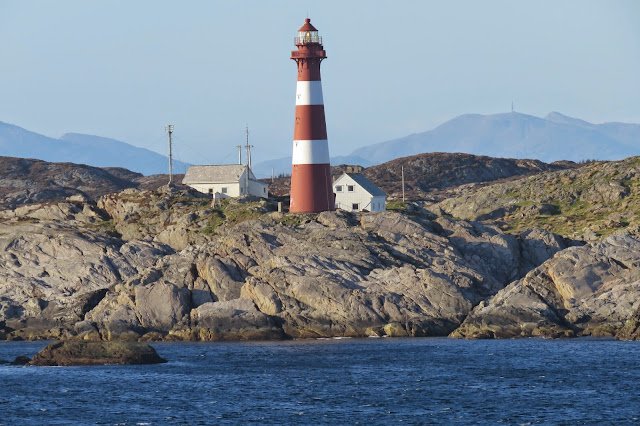 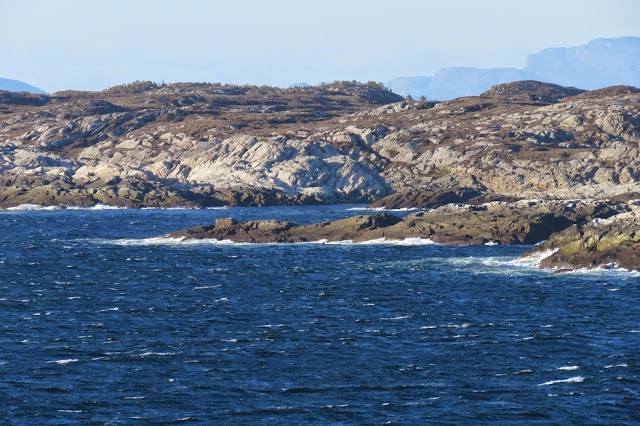 Reaching open sea... we're on our way back to Rotterdam. 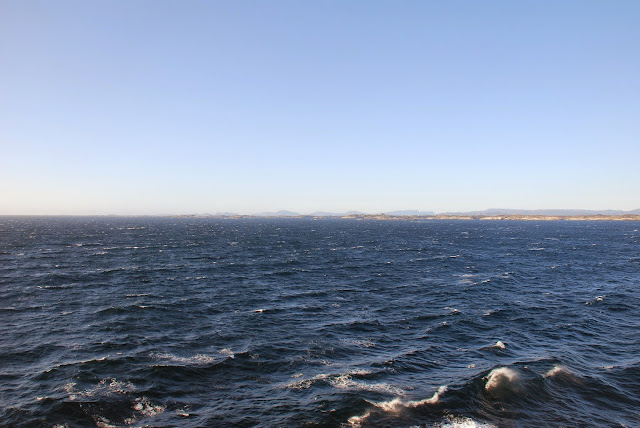 One more full day of cruising, two more nights on the ship. We're going to miss our darling towel friends! 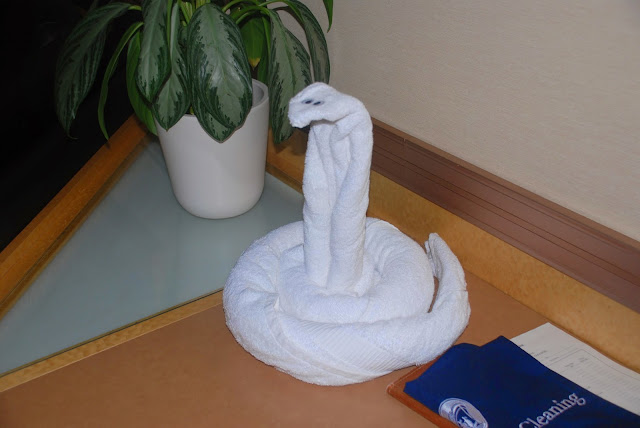